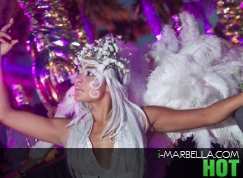 
The 10th anniversary celebration of Nikki Beach Marbella, that took place on the th of July, was a symbol of everything that represents Nikki Beach - glamour, fun, originality, entertainment, exclusivity and luxury. All the guests, amounting to about 1000 people, enjoyed an environment that reflects the quality, originality and professionalism of the world's leading beach clubs of luxury. A great success!

Throughout the night guests enjoyed the music played by resident DJ Mario Zárate, as well as well as guest appearances from old favourites of Nikki Beach like Cuba, the electric violinist from July and the saxophonist Florencio Cross. With by an amazing laser show, the dancers dressed in beads, the fireworks accompanied by music, the lighting effects illuminating the night sky and the performance of the percussionists; it was a non-stop performances from 9 p.m. until 2 in the morning.

The Party featured the presence of very beautiful people who enjoyed the champagne, the classic mojitos and cocktails of the Nikki Beach bar, in addition to endless trays of succulent culinary delights from the Nikki Beach Marbella menu inspired by the exotic places in which Nikki Beach Clubs can be found around the world. The whole celebration was enjoyed by Jack Penrod, owner and founder of the Nikki Beach chain.

10 years of Nikki Beach Marbella, not only luxury but proving a very important social and economical influence for the local and national Spanish economy.

Nikki Beach Marbella since making its original debut, Spain exactly one decade ago (in 2003), has become known to both locals and jet-set visitors as Marbella’s go-to hotspot that exudes everything cool, sexy and glamorous, a fabulous place to spend the day and evening at the beach with family and friends. From the extensive menu, refreshing cocktails & endless champagne, all accompanied by amazing music played by resident & guest DJ’s; its the coolest crowd and the most innovative themed events & entertainment around, Nikki Beach is more than “just a beach club,” Nikki Beach is a lifestyle.

The success of Nikki Beach Marbella during these 10 years, can be proved by the fact that they have doubled  the number of employees; their  public attendance to its  famous White Party is 6 times  bigger, the type of  clientele, the majority of which are foreigners, coming from Europe and America, helping to promote the national and local tourism of  Marbella as a luxury trademark.

Nikki Beach Marbella, has created an important worldwide reputation through its events as the White Party Opening Season, considered as the official party that marks the beginning of the summer season in Marbella. Nikki Beach clientele come every year from different parts of the world just to attend to this famous party, (US, South America, Europe, India, Africa…). This clientele stay in local hotels during the whole opening weekend, visit the area, go shopping and frequent other business. Even the luxury Puerto Banús shops, and famous Spanish fashion brands as Zara and Mango, change their window shops with all white fashion, because of Nikki Beach Marbella White Party is coming. The secret of this party is its high-level entertainment, service, gastronomy and atmosphere. 30% of the budget is dedicated to the entertainment, during 10 years we have seen amazing entertainers: giant balloons, aerial acrobats shows, with airplanes, parachutes shows, aerial acrobats hanging from cranes, water shows, incredible fire works, international Djs, international musicians, professional dancers, special and sophisticated decorations, and national singers.

Nikki Beach Marbella also has been used as location for interviews and fashion shoots for important media such as Hola, Vogue, Elle, DT, The Independent, The Sun… it has also hosted some of  very important private weddings, private parties,  brands presentations of luxury products as jewellery, cars, fashion (Ferrari, Porsche, Rolex, Spinosa,, Swaroswski, Hugo Boss, to name but a few)

During these 10 years Nikki Beach Marbella understands that the press material published and broadcast about them around the world  in different medias, always mentioning the name of Marbella and Spain, has been priceless.

We also have to consider the faith of this American brand, that decided to stay investing in Marbella and Spain even in very bad economical periods suffered in Spain when other international companies left the country.