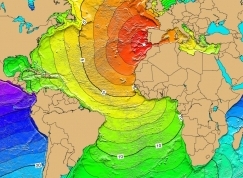 
An earthquake measuring 6.3 on the Richter scale rocked the west coast of Andalusia at 02.27 this morning, as reported by the National Geographic Institute sources.

The earthquake´s epicenter reached 58km deep and was located 100 miles south of Cape St Vincent on the coast of Portugal.  Witnesses reported that homes were literally shaking for several seconds.  According to 112 Emergency Services of Andalucia, there have been numerous calls requesting information as to what happened rather than reports of damages or injuries.

The quake was felt in Huelva however there were reports further afield from Seville, Cádiz and even as far afield as Madrid.  A further four aftershocks were recorded and more movements are expected.