Don't forget to put your clocks back on Sunday 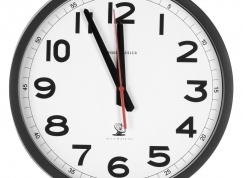 
Clocks go back an hour this weekend, in the early hours of Sunday morning, as Europe says goodbye to British Summer Time and adopts daylight saving time (Greenwich Mean Time).

Here in Spain at 3am on Sunday 25th (the last Sunday in October) clocks go back to 2am, GMT + 1.   Clocks have been changed forwards and backwards in the UK since 1916 thanks to a London builder by the name of William Willett. Willett first proposed the idea of British Summer Time in 1907 in a pamphlet entitled 'The Waste of Daylight', because he had noticed that on summer mornings, light was wasted while people slept, and that the time would be better utilised in the afternoon by putting the clocks forward. After campaigning for years the British Government finally adopted the system a year after Willett's death.
The system of moving clocks backwards and forwards did not, however, become common practice until 1974, after the first oil crisis forced governments to find ways of saving fuel.
The EU decided to standardise the dates in order to avoid problems caused by countries being out of synch, for example timetabling issues for trains travelling across various countries in Europe.
Clocks are now changed simultaneously at 01.00 hrs GMT on the last Sunday in March and the last Sunday in October every year.    In this way, people in the Canary Islands, Portugal and the UK will put their clocks forward at 2am, most of the rest of Europe will do so at 3am and people in the Baltic States, Bulgaria, Romania and Greece will change theirs at 4am.