David Guetta at Dreamers in Marbella 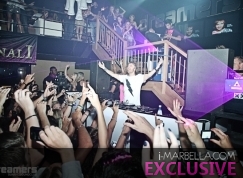 On the 27th of July David Guetta returned to the coast’s biggest and best superclub, Dreamers, in what was surely one of the highlights of the summer calendar.

French house music producer and DJ David Guetta, released his first album, Just a Little More Love, in 2001. Later, he released Guetta Blaster (2004) and Pop Life (2007). His 2009 album One Love included the hit singles "When Love Takes Over" (featuring Kelly Rowland), "Gettin' Over You" (featuring Chris Willis, Fergie & LMFAO) and "Sexy Bitch" (featuring Akon), the last becoming a top five hit in the US and all three reaching #1 in the UK, as well as another internationally known single called "Memories" featuring Kid Cudi which became a top five hit in many countries.

Guetta has sold over three million albums and 15 million singles worldwide. He is currently one of the most sought-after music producers, having worked with a variety of pop and hip-hop artists including Kelly Rowland, The Black Eyed Peas, Jennifer Lopez, Flo Rida, Nicki Minaj, Rihanna, Lil' Wayne, Kylie Minogue, Taio Cruz, Snoop Dogg and Madonna.

Madonna to Rap on Next Album (1)