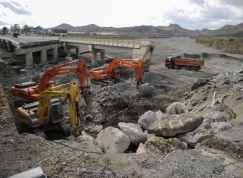 
Two people remain missing, a man in the Guadalhorce Vally in Málaga.

Following the torrential and widespread floods in the south and east of Spain the Insurance Pool has put the damage at 120 million €. The figure comes after some inspectors have been taking their first look at the damaged land.

The Valencia Community calculates compensation at 62.7 million €, 42 million € in Andalucía and 15 million € in Murcia.

The ‘gota fria ‘ left five dead in Murcia and five dead in Andalucía. Two people remain missing, a man from the Guadalhorce valley behind Málaga, and a 70 year old German man who lived in a finca in Puerto Lumbreras. Heis thought to have been swept away as he walked home from the market in Lorca.

The AVE high speed train service between Madrid and Valencia is now back in service.