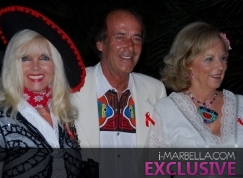 
Concordia Association organised a Gala in Marbella Club Hotel on the 30th of July.

The Concordia AntiAIDS Association is a non-profit, private (non-governmental) organisation which was set up in 1994 to look after the urgent needs of a group of people connected with HIV / AIDS who require special care and services. The association organised a big Summer Gala in Villa del Mar located at Marbella Club Hotel. The theme of the event was "Viva Mexico" and over 350 people attended the event. The president Queen Sofia and Princess Maria Luisa of Prussia welcomed and thanked each guest personally. Among the attendees were Gunilla von Bismarck, Luis Ortiz, Carmen Lomana, Fernando Martínez de Irujo, Ariana Hohenlohe, Kristina Szekely, Ute and Mario Ohoven.