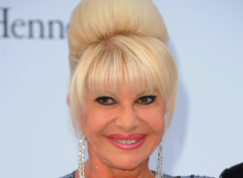 
Ivana Trump, considered to be the richest woman in the world, is following in the footsteps of Michel Obama and will be staying in the same suite as the First Lady at the Villa Padierna Hotel.

She has been invited by Countess Alicia de Villa Padierna, and her husband, the President of Urbanizadores de España, Ricardo Arranza, and will be followed by a small army of the US press.

Ivana Trump and a group of celebrities will be dining and partying with the Marbella jet-set, as well as shopping in Marbella town centre, and lunching with Rudolph Schonburg and his wife, Princess Maria Luisa of Prussia (cousin to Queen Sofia of Spain), before attending the ‘Children for Peace’ Gala at the Villa Padierna, sponsored by the owner of La Cañada Shopping Centre, Tomas Olivo, on June 4.

Also the International charity “The Children for Peace” has chosen British photographer and artist Paul Wilcockson L.M.P.A to represent them, and at his request, he will be assisted by the talented photographer Diane Sutton, flown in especially from the UK, to work with Paul, on this glamorous and distinguished Gala event. The President of the charity Debbi Mace and the Vice- President  Lamia Kashoggi are both admirers of Paul’s work. The event will be compered by the glamorous Spanish star Ana Obregon.

THE CHILDREN FOR PEACE next Charity Gala Dinner is June 4, 2011

Model, actress, writer and humanitarian, and UNESCO Artist for Peace, Marisa Berenson, our Honorary Chairwoman, welcomes you. “The Children For Peace Award” sponsored by “Maggiore” will be presented.

Exclusive interview with the Queen of Marbella - Olivia Valere