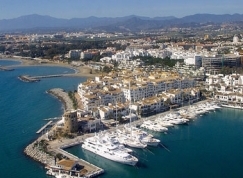 The anticipated hour long documentary on Marbella finally aired last night on ITV with Marbella anxiously waiting to see how Piers would portray one of the Mediterranean’s most infamous resorts.  After damming previous shows such as the notorious Marbella Belles that have showed Marbella and it´s residents in an anything but a positive light; residents and business owners breathed a welcome sigh of relief.

There were some stunning aerial shots that showed not only the glitz and glamour of the port but the natural beauty of the landscapes and the magnificent backdrop of the La Concha mountain coupled with an articulate and amusing commentary throughout by Piers.

Piers set out to discover the essence of Marbella and to examine the paradoxical nature of the sunshine city´s fame; Costa del Crime and it´s burnt boozing Brits versus the jet set nature of this beautiful town, however, what he actually discovered was "quite an extraordinary side to Marbella - one of staggering wealth and discretion."

His tour took us through the über rich enclave of La Zagaleta, to Linekers Bar, another world away in the backline of Puerto Banus where thousands of British Holiday makers and hen nighters drink themselves into oblivion.   His tour of Marbella in a white open top Ferrari included a visit to a former British Knight of the Realm´s spectacular villa that rents out for a staggering 20.000€ a day and a trip up to Ronda to visit the high octane; Ascari Racecourse.

The show also included a shopping trip down to the Port with former Birmingham City Football Club MD Karren Brady; his look of sheer horror at the shock of discovering a bag being sold in Fendi for 16.000€ with a flabbergasted comment of “16.000€ for a handbag, are you mad?!?!?” was classic.  More absurdity followed in the renowned luxury beach club, Nikki Beach; Piers looked on incredulously to witness the ridiculousness of a champagne spraying party, (where a magnum of Cristal goes for 1900€ a bottle), whilst Gazza´s daughter Bianca Gasgoine pointed out “You can’t drink all the champagne so you might as well spray it”!!!

A visit to Marbella would have been impossible without going to the iconic Marbella Club and Olivia Valere´s or as Olivia herself put it, to come to Marbella and “not come to visit my place is like to go to Roma and not visit the Vatican”!

The show would not have been complete without touching on the Costa del Sol´s sullied reputation or as it has also been referred to, Costa del Crime.  Piers interviewed so called “expert” and local crime journalist and author, Wensley Clarkson, who declared that Russians recently carried out a fatal shooting (really it was French Algerians six years ago) and then spoke of Marbella as the “centre of criminality” (what his definition of criminality is one can only imagine).  He then smoothly rattled off that “Sixty to seventy per cent of new build developments came from black money” (who knows where he got his facts from!) – it does not seem that the show gave such an accurate portrayal of the alleged “Costa del Crime” after all.

There was no mention however of the normal side of life here on the Coast, yes there are normal people who sit comfortably in between the mega rich and the euro trash.  Surprisingly neither there was there any mention of two things that we have in great abundance here; hoards of fish lipped, enhanced ladies (I would have expected a cheeky comment or two!) and of course, the healthy side of Marbella life that comes with the wonderful weather and fresh air; sport.  Golf lends itself to a big part of Marbella´s success and was hardly mentioned.

All in all Piers Morgan showed Marbella in the positive light that it deserves; a beautiful place that caters to many different social stratas.  The question now remains, will Mr. Morgan be becoming a new Marbella resident?

johnny 14-01-2010 01:09 What the hell was Wensley Clarkson on about, all his figures were wrong and the intended victim in the Hairdresser shooting got away unscathed, If you want to be taken seriously Wensley do your homework first
0