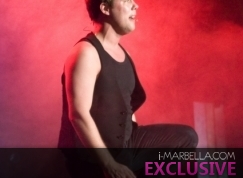 
Titles from musical greats like Chicago, Evita, Miss Saigon, Jekyll and Hyde or Dirty Dancing were applauded by the audience. The dinner, by the hotel chef Simon Padilla, was made up of prawns, green asparagus and smoked salmon with lettuce Lettuce balsamic vinegar as a starter. Mignonette of Beef tenderloin sauteed in port and truffle sauce accompanied by mini organic vegetables and new potatoes. For dessert, Williams Pear cake with almonds and cinnamon ice cream, custard and raspberries.

The audience was delighted by the concert which recieved a standing ovation. The biggest sponsor for this event was The Continental Nord Capital.