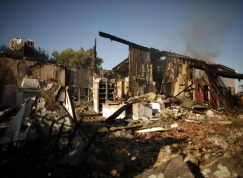 A house is burnt after a wildfire in the neighborhood of Entrerrios in Mijas Source: Scanpix


A bonfire not been properly extinguished near a stream in Entrerrios, Mijas, was the cause of the wildfire which started on Sunday (12th September) night destroying a vast stretch of land.

This was the conclusion reached by the regional government’s fire investigation unit, Brigada de Investigacion de Incendios Forestales, on Monday (12th September). Remedios Martel, from the Junta de Andalucia, dismissed rumours suggesting the fire was an act of arson. Five homes were damaged, two of which were completely destroyed by the fire. But witnesses say minor damage has affected several other houses in urbanizations including El Soto de Marbella, Elviria, set in a UNESCO designated nature reserve.

Jan Mansi, former president of Phase 2 at El Soto de Marbella Urbanization described the landscape after the fire as “a skeleton of what it was.” “People mainly come to live in the area for the greenery,” she said. But residents at El Soto should consider themselves very lucky, she said, as the flames spread to just metres from the properties.

The blaze affected 6.8 million square metres of in Mijas, Ojen and Marbella – the equivalent of 958 football pitches – according to Infoca, the regional fire department. Around 300 properties were evacuated in these areas but occupants were able to return to their properties on Monday. Twenty five patients at a drug rehabilitation centre in Mijas were also evacuated after the staff were told by Guardia Civil they were at risk due to strong winds, according to Paloma Alonso from the facility.

They spent the night at the Las Lagunas sports centre being allowed to return on Monday afternoon. The fire was brought under control at 9am Tuesday, and declared completely extinguished at 10pm. Five hundred people participated in the effort to extinguish the blaze, as well as 11 fire engines, and 22 planes and helicopters.

This is the biggest fire in Mijas since 2001 when a car blaze led to a wildfire that affected 700 hectares of land.