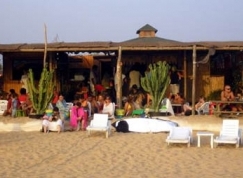 
Hopes remain high that 90% of beach bars will be able to remain where they are.

Chiringuito owners who have their beach restaurants directly on the sand were relieved to hear this week that the junta estimates that 90% of the chiringuitos in the province are legal or susceptible to be legalized.

There are some 2000 beach restaurants in Andalucia of which 800 are directly on the sand and under threat to be torn down pending Spain's zealous Ministry of Environment to enforce coastal protection legislation that has been on the books for two decades.   Andalusian politicians called the beach bars "basic ethnographic heritage" when last year they approved a motion in their regional parliament to preserve the chiringuitos.   The bars are an inherent part of the Spanish Mediterranean gastronomy, traditions, identity and lifestyle, they said.

The law bans permanent construction within 320 feet of the shore and sets a limit of 1,600 square feet for restaurants — conditions that many chiringuitos, built years ago, do not meet.

The presidential advisor, Antonio Ávila announced this week that the control of coastal policy will be transferred to the Junta de Andalucía in the first trimester of this year although at this point it is unknown which commission will take responsibility.  Ávila has assured that the transfer will be beneficial because “la junta is closer to the citizens and permits a different vision”, in spite of these declarations the advisor will carry out the current legislation as “the law is the law and is not susceptible to modification”.

Ávila demonstrated the will of the Andalusian Government to reach an agreement about the transfer and assured that the Junta will do everything possible to reach a “satisfactory solution which gives a boost to the sector to improve its competitiveness”.   The chiringuitos are a “priority sector” for the Andalusian Government from both an economic and social point of view and furthermore, “a sign of the identity that endows Andalucia as a main competitor in the face of other touristic destinations”.

A third meeting is set for the month of January.