Annual Charity Gala of Spanish Association Against Cancer in Marbella 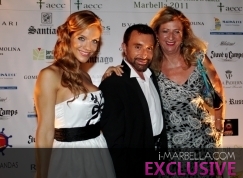 
Spanish Society has showed its commitment in the annual charity gala of the Spanish Association Against Cancer in Marbella organized by the AECC.

Success is the word for the celebration of the annual charity gala of the Spanish Association Against Cancer in Marbella. About 400 guests gathered yesterday at the Hotel Villa Padierna in response to the charity event of the Costa del Sol.

The number of attendees reached has left a good impression on the local AECC executive, chaired by Maria Cruz Robles of Nery. Event organizer, Ruse Caballé, said yesterday that ticket sales had doubled the number of people registered in previous years which "stood at around 200 tickets."

Past eight-thirty in the afternoon, the welcome cocktail began where the photocall was to become the meeting point of the most important faces of the night. famous people like Laura Valenzuela, Maria Pineda (both have passed the experience of facing a cancer diagnosis). Barbara Rey, Carmen Bazán accompanied by his son´s girlfreind Beatriz Trapote, the retired matador Jaime Ostos and his wife Maria Angeles Grajal, etc...

The Spanish Association Against Cancer (nonprofit organization)has its headquartered in Madrid and operates in Spain through its 52 Provincial Boards, with representation in over 2,000 locations across the country. It was launched on March 5, 1953 in order to fight cancer in all forms. It is composed of volunteers and paid staff members who come together to achieve the objectives of the Association. Integrity, professionalism, dedication and responsiveness of all members of the AECC generated a common culture characterized by a continuous momentum. On September 29, 1966 was registered with the national number 3827 of the 1st Section in the National Register of Associations. It was declared a "public utility" by agreement of the Council of Ministers adopted at its meeting on April 24, 1970.