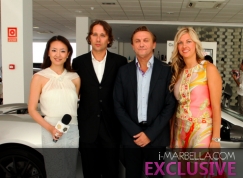 
Monday, the 20th of June was a very important day for the art-lovers of Marbella. The exhibition of Andy Warhol works was opened in Guarnieri.

Guarnieri Group in collaboration with Dellart and Coastfield Project organised a unique exhibition to their clients, bringing 20 original artwork of the creator of the POP ART to Marbella. The exhibition started on the 20th of June and it is called ANDY WARHOL at CARS AND ART and it will run until mid September.

Dellart is the main organiser of this exclusive exhibition and two of the works belong to them. After many years of experience gained working in major museums in Italy and Europe, they have applied their historical, critical and scientific knowledge to the study of private collections. Because collecting is an art that requires great expertise. Today they are the curators of some of the most prestigious collections, all over the world. Many of the collections they have created have been the subject of exhibitions and monographs, and today they are a point of reference for scholars of the period concerned. Through their Network of Consultants operating in the most important art market spots worldwide, they are helping you in the art world.

The exhibition was opened by Joachim Langhans from Rotary Club, Mari o Guarnieri from Guarnieri, Alessandro Della Morte from Dellart, Saeko Hamada from Coastfields Projects and among the guests were Ahmed Ashmawi, Elly Ashmawi, Lilo Boetefuer, Nina Junot, Isabel de Borbon and many more. Maria Rosa Perez, a fabulous opera singer performed 3 arias from 3 different operas. Also Channel 4 covered the exclusive opening and followed Saeko Hamada during this important day. Besides the exhibition in Guarnieri they filmed her at the Marbella Club, where she spoke about her family history and her charity activities.

If you are interested in buying these exclusive artworks, there is possibility to arrange a private viewing before and after the opening on the 20th until mid September at Guarnieri Consecionario in San Pedro. By reservation only!

SAEKO HAMADA 26-06-2011 03:20 Thank you so much. I am very lucky to have my family and friends who support me and guide me always. I try my best to contribute to our society to help many charity activities as possible.
0

Phil 22-06-2011 16:36 How can this be exclusive there are about 10 other photographers there plus I lovw the way the counter goes up by 5 or 7 every time you click an image, very clever makes the site look quite popular
0

SAEKO HAMADA 22-06-2011 14:27 I would like to say thank you to Guarnieri for their full support for this event and Dellart for bringing us such a beautiful art works of ANDY WARHOL and Rotary Club Marbella for their presence . All my friends and local press thank you all for coming I hope you enjoyed Cart&Art and Opera.. Artistic afternoon in MARBELLA.

And of course special thanks to i-marbella.com for their constant support to all my events and Charity Activities.
This time also, a part of the sales form each art woks will go to Rotary Club Marbella as a donation for all the charity activity we do as a Rotarian. Thank you very much for your attention.
If you like to see ANDY WARHOL art work at Guarnieri please contact me.