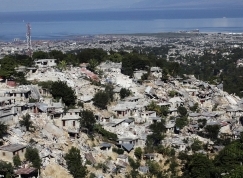 
The 25 year old pilot, Javier Fernández, was in the Caribbean island of Haiti at the time of the earthquake...

The pilot from Marbella who now resides in Santo Domingo and works for Torugair was in Puerto Príncipe, the capital of Haití at the time of the disaster, “he only told us that he was fine and did not have enough time to give more details as to what happened” his father stated.

Deputy Prime Minister Maria Teresa Fernandez de la Vega, confirmed today the deaths of a Spanish couple; María Jesús Plaza and Yves Baltroni, who were identified by their two daughters.  These are the first two confirmed Spanish fatalities and so far 87 of the 111 members of the Spanish community residing in the country have now been contacted.

According to estimates by the International Red Cross Federation from the testimonies of the rescue services on the field, and data supplied by the Haitian Government, the earthquake, measuring 7.3 degrees on the Richter scale and whose epicentre was just 15 miles southwest of the capital, may have killed as many as between 40,000 and 50,000 people.