A Table From The Sea's Edge 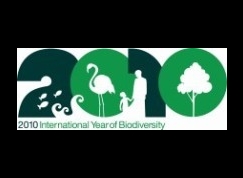 A Table From The Sea's Edge, is an art project, devised and being carried out by Silas Birtwistle to raise awareness of environmental issues and promote conservation of the world's coastal and marine biodiversity as a contribution to the UN International Year of Biological Diversity, 2010.

The sculpture will be unveiled during the International Year of Biodiversity at the tenth meeting of at the Conference of the Parties to the Convention on Biological Diversity (COP-10) taking place in Nagoya, Japan, in October, 2010. It will provide a platform for a multitude of high-level UN debates on environmental issues, and facilitate discussion in a novel and stimulating way.

In order to implement the project, each of the twelve chairs are being offered for sponsorship to a diverse array of organizations, providing branding opportunities through corporate interaction and displaying commitment at the table during a world tour.

From Nagoya, it will be exhibited and used at a number of venues around the world, during 2011, the UN International Year of the Forests.The piece will eventually be auctioned with all profits made available to participating NGOs and indigenous communities where the driftwood originated.