A Day at the Races with Stephen Webster 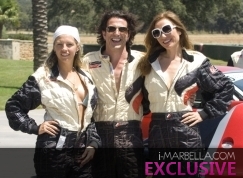 Saturday morning... the morning after one of the great events of the season, Bryan Ferry of Roxy Music fame playing to 200 select guests for the 1st anniversary of Stephen Websters famed jewellery shop in Puerto Banus.

I have to confess to having a fine hangover so the prospect of driving up to the Ascari Race Resort in Ronda filled me with dread, even though it is one of the great "drives" in the World. But then Mario Guarnieri offered me a brand new BMW F800R for the trip.

Job done...I am a sucker for anything on two wheels especialy if they look as sexy as this beastie.

Mario took the opportunity of "running in" his brand spanking limited edition Ferrari Californian whilst my i-marbella partner Annika and Stephen took charge of a tricked BMW something...I told you I do two wheels not four.

I won't bore you about the bike but I will tell you it stuck to the Ronda curves like s*** to a blanket assuring I was as always first to the track.

After a typical Ascari style buffet Stephen and Annika were treated to several high speed laps with Mario in his Guarnieri liveried Radical.

Also as a complete bonus and a surprise to all, BMW wereholding an exhibition of 25 years of the brand and so a fine day was had by all and yes the hangover lingered on and on.