Vladimir Putin is moving to Marbella 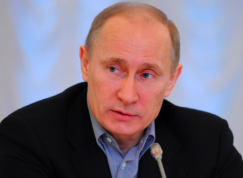 It's reported he is buying a property in the luxury La Zagaleta urbanisation.

The Russian Prime Minister is currently buying a property in the luxury La Zagaleta urbanisation in Benahavís. Website Vanitatis reports Putin has been convinced of the charms of the area by the ex Mayor of Moscow, Yuri Luzhkov, who already lives in the urbanisation which he describes as ‘my place in the world’, where he has planted fruit trees and install three hives which give ‘a fantastic honey’.

Those who live in the urbanisation have the right to vote on whether or not to accept any new neighbour, and Vanitatis reports that some of the people who have been rejected include Julio Iglasias, Shakira and David Beckham. Hugh Grant was accepted however.

Other residents are one of the most important leaders of Iran, Ak Kujala, who was indicted in the Ballena Blanca money laundering case, and the British businessman Sean Woodhall who has been found guilty of fraud in the UK linked to car sales.

Putin looks likely to be the new Kashogui in Marbella, famous as he was for his luxury finca in Al Baraka with gold taps covered with rubies.

Is that Vladimir Putin's new villa in La Zagaleta? (4)