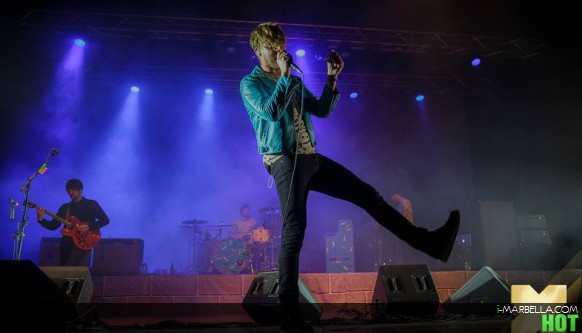 
One of the UK’s most loved Indie Rock bands rocked Torremolinos in a Mega Summer Concert on August 6.

Fronted by the charismatic Ricky Wilson (who is also a judge on BBC's The Voice), the Kaiser Chiefs exploded onto the music scene in 2005 with the release of their first album Employment, which included the single I Predict a Riot.

This single was named in New Musical Express as one of the Top-40 Greatest Indie Anthems Ever!

This was followed in 2007 with their second album Yours Truly, Angry Mob, which gave them their first No.1 album, and from this also their first No.1 single hit, Ruby. Kaiser Chiefs went on to have 5 top-10 singles and 2 No.1 albums, to date achieving over eight million album sales. In 2006, they won no less than three prestigious Brit awards!

In 2012, Kaiser Chiefs performed in the closing ceremony of the London Olympics, playing Pinball Wizard by The Who. Following this performance Kaiser Chiefs opened the Hyde Park concert for The Who in 2015, they have also toured with U2, Foo Fighters, and Green Day, confirming them as one of the most popular concert bands in the world.

The only change to the original band line-up was made in 2013, when drummer Nick Hodgson left and Vijay Mistry joined Ricky Wilson, Nick Baines, Andrew White, and Simon Rix. Fans will be pleased to know that the most popular songs from all the bands albums will be featured at the concert!

Sala is The Sun’s choice