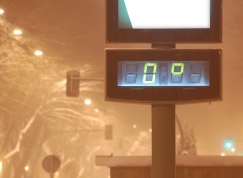 
Spain is bracing herself for a freezing weekend that may be the coldest in 60 years!

The spell of polar weather that is about to hit Spain is a phenomenon that happens only in every seven or eight years, but this one could be the worst in 60 years. The similar situation was in December 2001 and in January 2005, but this time is expected to be even colder than then! Winds can be up to 70 or 80 km/hour in the NE of the country and on the Baleares will increase the sensation of cold with the wind chill.

Angel Rivera, who is spokesman at the Spanish State Meteorological Agency (AEMET) said the situation ‘is not unheard of in winter’, but added that in this case, as well as the low temperatures, the wind chill would make it feel particularly cold.

The freezing weather is caused by an anticyclone in the north of Europe, with an axis running NE-SE and which is bringing the cold air south to the Mediterranean. The NE winds are bringing air from Russia and even Serbia! The snow line in Spain will be down to 400-500m for today and tomorrow for most of the country, although we could see snow on the beaches of Cataluña and the Basque Country, and also on the Baleares. Temperatures will not to go lower than -5 to -10 in most of the country and can reach -14 or -20 in mountainous areas.

The coldest parts of the country will be La Coruña and Almería. But curiously more snow is being forecast for Africa than in Spain. The cold air will reach the north of Africa and low temperatures will be ‘significant’ in Algeria, Tunisia and Libya, and more snow is expected there than in Spain!

Temperatures will improve from Sunday, starting in the west of the mainland but on the Baleares there will be little improvement until Tuesday.

The upside of the heavy rains (2)