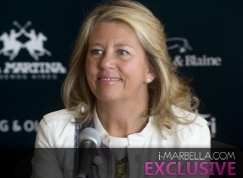 On the 4th of May, Marbella celebrated the press conference which marked the introduction of Marbella Luxury Weekend, which will take from 2-5 of June and will focus its activity around the world of fashion within the privileged setting of Puerto Banús. José Luis Hernández was very positively disposed about the tourism in Marbella during this summer season.

At the press conference there were Marbella Councilor for Tourism, José Luis Hernández, Mayoress of Marbella, María Ángeles Muñoz, Princess Beatrice d´Orleans, the president of the CIT (Centre for Tourist Initiatives), Juan José González and the Vice-president of Puerto Banus, José Vidiella.

The Mayoress expressed her pride in the effort put into this event which will “promote the image of Marbella” in the unique setting of Puerto Banus. She also thanked all the organizations and international brands involved in the event, in particular Princess Beatrice d´Orleans for her active involvement in the project as the public face of Marbella Luxury Weekend. The Princess shared her “huge excitement” about the plans, saying that the mere mention of the project was “already making a lot of noise”.

Marbella Luxury Weekend also has the support of the Centre for Tourist Initiatives (CIT). The president of the CIT, Juan José González, sees it as “a fantastic opportunity to promote the city” which, he reminds us, is one of the main objectives of the organization which he represents. Similarly the Vice-president of Puerto Banus, José Vidiella, expressed his delight that “The port and its facilities had been chosen as the setting for this event”.

Representatives of the more than thirty international brands involved in the project also attended the presentation of the project to the media. In particular the presence of Simoneta Gómez Acebo, the communications director at Cartier, caused great excitement.

For the councilor, José Luis Hernández, Marbella Luxury Weekend represents the opportunity to “bring to life everything that shines in Puerto Banus” and “throw into light Marbella´s potential as tourist destination, thus highlighting the qualities which make Marbella different from other tourist destinations in the Mediterranean. We are expecting over 9000 people to visit the Luxury Weekend." Not only a lot of visitors are expected, but many people and companies are helping to organize this event. Over 200 people are involved in the process.

The councilor also told i-Marbella that he thinks it will be a great summer for Marbella. All the signs are voting for that as well. "For example all the 5 star hotels have already booked 70% of their capacity in May and June. Comparing to last year’s figures, this is a huge improvement. Already in January the increase of visitors was 22% better than last year and February 18%," he added. What is more Hernández said that not only hotels are doing better this year, the golf courses are making their way up too. For example Guadalmina Golf Club's income has increased 25% in the first part of the year in comparison to the previous year.

About the Luxury Weekend

The emblematic port of Marbella will transform itself into an extraordinary showcase for the coming together of fashion, trends, exclusive presentations and luxury. The brands joining this unique proposal will exhibit their collections on a catwalk located on the main jetty of the port.  It will be one of the central points of the weekend together with other exceptional settings. The area will also be scattered with a dozen marquees in which firms will host their particular activities.

Celebrities will enjoy special attention in the exclusive V.I.P. marquee, invitations for which are limited edition. Personal attendance invitations are currently being sent out.