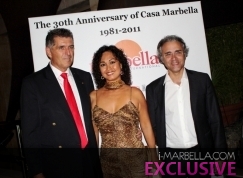 
The 30th anniversary of Casa Marbella International took place on the 22nd of September in Thai Gallery Restaurant.

The party was a great success and besides all the beautiful people there was some amazing entertainment as well! The fabulous Paco Garcia gave an unforgettable performance and after that people were blown away by the glamorous fashion show presented by Fashionvilla and Julia Rep. The founder and director of Casa Marbella, Wolfgang Schlesier, expressed his gratitude towards Marbella and all his friends and supporters here. The biggest thank you went to his fiancé, Xusan Teo, who has been a big support through the years!

Founder/Director Wolfgang Schlesier came to Marbella for the first time in 1973 and instantly fell in love with the place. With the Arab boom starting, he moved in 1981 permanently here, setting up a property business. In 1992, the company’s name was changed to Casa Marbella International and has built up a strong reputation of professionalism and practice a strict Code of Ethics. Casa Marbella is also one of the biggest network companies with a Multiple Listing Service, and has one of the largest property databases on the Costa del Sol.

Casa Marbella distinguishes itself from the market by their sincere effort to create value and trust with all clients, partners and associates. This philosophy permeates the organisation and every contact with all parties involved. Having experienced various booms (in 1973, the 80s, 1998-2006), Wolfgang Schlesier is convinced that Marbella is heading for a brilliant future. Just one example, the new Port Al-Thani willmake Marbella the “Dubai” of Europe. The projected and approved High Tech Park on the Ronda road will attract investors, create employment and demand for housing.

With his fiancé from Singapore on his side, Xusan Teo, the Chinese market is the next target. Having offices east and west of Marbella, network agents and collaborators along the Costa del Sol, they cover all of the Greater Marbella Area. With a choice of more than 11.000 properties on their web site casamarbella.com, from quality apartments to the most prestigious and exclusive estates, Casa Marbella has it all!