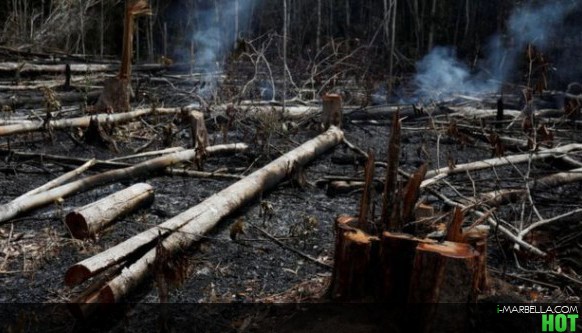 The Fire in the Amazonia Spread in August 2019 Source: i-Marbella.com


A terrible fire has been raging in the Amazonian Rain Forest for two months (July and August 2019) in an accident that apparently originated from the slash-and-burn of some workers who were preparing the land to work in agriculture.

It is estimated that because of the drought that has been established on the continent, it has not rained often enough since December. For this reason, these incidental fires spread very quickly throughout the vast Amazon.

According to the AP news agency in Boa Vista, they took the statements of the state governor, Neudo Campos, who requested help from the government of Venezuela and Guyana to establish a quick solution.

The catastrophe has generated terrible damage in more than 35.000 Km2, a space similar to the size of Taiwan, and the most serious thing is that it continues extending almost 10 Km each day until Friday, August 23rd.

This could be considered a world emergency because Amazonia is considered one of the most important plant lungs of the planet.

Protective agencies in these important areas do not have what they need to resolve this type of emergency.

It is estimated that the cooperation of the countries involved (Brazil, Venezuela, Guyana, and Bolivia) will contract the services of helicopters and special airplanes to combat the arduous flames of the mega-fire, and despite these efforts, not much can be done to solve the problem.

The hermeticism of governments in this regard is not surprising, there are issues related to electoral campaigns and political resolutions more "important" to resolve. It is not the first time that these issues have overtaken environmental needs.

As the fire started in Bolivia, the issue has been topic off political debate and a tool for pre-electoral discussions.

On the other hand, figures indicate that with the arrival of President Jair Bosonaro from Brazil, the cutting and burning of spaces in the Amazon for commercial purposes has intensified.

President Bolsonaro denies that these figures are real. In the meantime, this catastrophe is rapidly worsening and there seems to be no solution.

The first signs of fire were strong enough weeks ago to have carried out some state maneuver to control the spread of fire through the Amazon, but the governments of the countries involved left everything to the fate of nature, resulting in the tragedy that has worsened to the point of them not being able to resolve it.

Currently, the disaster is spreading to Paraguay and Peru.

On the other hand, there is an important dispute regarding the solutions, as France is leading the G7 offer to reduce the fire's impact and the presidents of both France and Brazil are not in good terms. So to speak, president Bolsonaro rejected the G7's help until the France president withdraws his argument blaming him for the fire.

Effects of the Amazon Fire

As you can see, the neglect of the amazonian rain forest is generating much more than environmental problems.