Top Tips for Seeing the Solar Eclipse in Spain 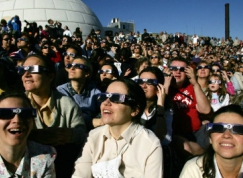 On Friday, Spain will witness the most spectacular eclipse in 10 years. Let i-Marbella fill you in on where to get the best view!

On the morning of Friday, March 20, Europe will be plunged into dimness during the most complete solar eclipse in 10 years, when the moon passes in front of the sun. Spain last witnessed a solar eclipse in 2005. In 1999, Europe witnessed the last total eclipse of the millennium.

When is it happening?

Where is the best place to watch the eclipse?

Will it even be that impressive?

How should I watch it?

You should watch the eclipse through special eclipse glasses, never look directly into the sun. (Eclipse glasses are selling out quickly online, so check out local tourist shops, as well as photographic shops to see if they are stocking them.)

Cameras and phones should also not be pointed directly at the sun, which could damage their lenses -- make sure to protect your camera equipment on Friday.