Remembering the Tsunami of 2004 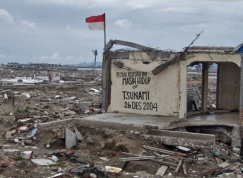 Ten years ago today, the world experienced an awful and tragic event – the third largest earthquake ever recorded (measuring 9.1-9.3 on the Richter scale).

The earthquake was caused when the Indian Plate was subducted by the Burma Plate and triggered a series of devastating tsunamis along the coasts of most landmasses bordering the Indian Ocean, killing ca. 230,000 people in 14 countries, and inundating coastal communities with waves up to 30 metres high. It was one of the deadliest natural disasters in recorded history. Indonesia was the hardest-hit country, followed by Sri Lanka, India, and Thailand.