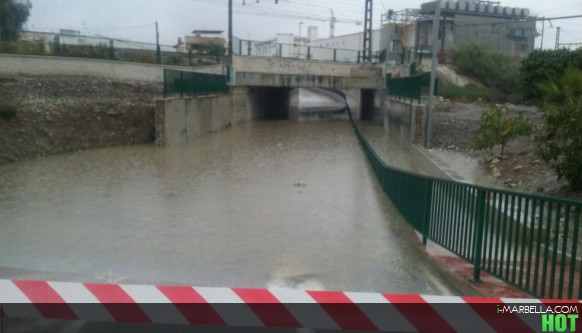 
Heavy rain caused flooding chaos in Málaga over the weekend.

Two tourists had to be rescued in Velez-Málaga due to the dangerous downpours, which also caused a mini tornado, landslides and trees to fall in the Sierra regions and on the Costa del Sol.

La Sierra de Mijas, Fuengirola, Marbella, Guadalhorce, and Coín saw the most intense rain fall, which led to around 160 emergency calls being made in just two days.

Over one third of the area's total rainfall for 2015, 165 litres, fell in the province from when the rain first started last Monday until Sunday evening.

Emergency services were called to save two people from their car in Almayate Alto near Velez-Málaga after they got caught up in a flood.

In Cartama, a main road under a bridge was rendered impassable after a nearby river bank burst, while some drivers were left trapped in their cars due to flooded streets in Mijas and Fuengirola.

Marbella's main Avenida Nabeul was also flooded, just one day after it re-opened following roadworks that were supposed to have resolved drainage issues.

Firefighters also had to rescue a car that had become stuck in the mud in Las Lagunas, Mijas.

Further afield, Valencia was also hit by flooding, while hail fell in Cordoba.

But the torrential rain was not all bad news for the area.

Málaga's reservoirs are now over one third full (39,4%), after being at their lowest levels since 2009.

Nature lovers have also been enjoying the rebirth of rivers that have been dry throughout the year due to the lack of rain.

People have been urged to take care next weekend, when more downpours are expected.

The Protección Civil has advised travel on main roads only during heavy rain, avoiding slippy or uneven routes.

In hilly regions, people should stay clear of lower areas at risk of landslides.