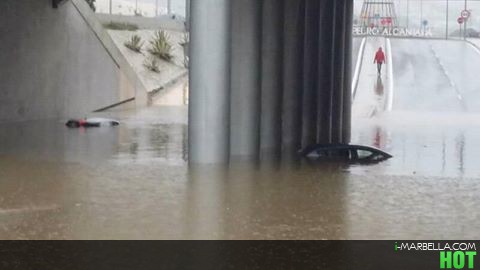 Storms, heavy rain and flood many areas in Costa del Sol and Marbella 2016


AS PRESIDENT of the Andalucian community, Susana Diaz, arrived in Malaga to visit the Centre of Emergencies and show solidarity for the thousands of home and business owners thought to have been affected by the widespread flooding, new of the first fatality broke.

A red danger warning, the highest possible, has been issued by Spanish meteorological service Aemet for the region after a massive 200 litres of water per cubic metre fell in just 12 hours.
Rivers and streams overflowed leaving much of Estepona underwater and the River Guadalhorce burst its banks in Estación de Cártama.
Several rescues had to be carried out in Mijas and Estación de Cártama where homes were flooded.
The Avenida de Velezquez near Malaga Airport was still closed on Sunday afternoon due to water on the road.

An electrical storm, which stunned residents later described as being “the strongest in living memory” hit the Estepona area at around 4am and caused extensive chaos, with many people having been forced out of their homes.

Elsewhere, firefighters in Malaga City managed to rescue a man who became trapped in the pedestrian tunnel next to the Hacienda building, while three women were also saved on the Guadalhorce industrial estate.

President of the Industrial Estates Association of Malaga, Sergio Cuberos, confirmed that “the Santa Cruz estate is just a massive lake,” adding that “we have not seen anything like this since the floods in 1989.”

The driver of a public bus service that was almost entirely engulfed by a wall of water as the rio Guadalhorce broke its banks early in the day managed to escape unharmed, having been aided by two colleagues a few metres from the company’s garage.

Some citizens are being housed in the municipal sports centre after being rescued from the roofs of their houses, in one case the bonnet of a car.