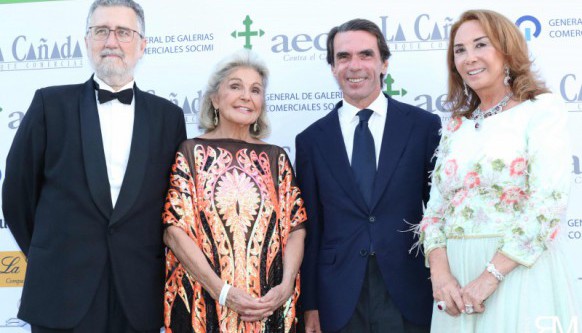 
AECC Marbella (Spanish Association Against Cancer) has held on Sunday, August 5, 2018, its 35th edition at the Royal Golf Club of Guadalmina with a record of attendees and revenues collected with the aim of financing its Centro de Día (Day Center) in Marbella. A gala displayed by Boris Izaguirre and Paloma Lago and with a final party of the singer Pitingo.

A Gala of the Spanish Association against Cancer from Marbella is one of the events with more years being held at Costa del Sol. Last Sunday, August 5, they celebrated their thirty-fifth edition with a guests list of  580 people, which was an attendance record, and with dozens of familiar-famous faces that did not want to miss the opportunity to support this cause.

The chosen place was the Real Club de Golf de Guadalmina which has been for some years now the official place to celebrate this gala. As for the "photocall" there were many known faces that photographed together with the president of the Association, Maika Pérez de Cobas, among them were the former president Aznar, the Princess Beatriz de Orleans, Paloma Lago and Boris Izaguirre, presenters of the gala, Vicky Martín Berrocal, Princess Bea Ausberg, Nuria Fergó, Simeone's wife, Carla Pereira, Inés Sastre, Jaime Ostos, Carmen Lomana, Federico Beltran, Tomás Olivo, Maya Swarosky, Carila Pique ... among others.

The money collected reached out up to € 250.000, including tickets, donations like the La Cañada Shopping Center, raffles, and auction. There were about 750 gifts for the raffle, so there were many who left with a gift at least under his arms. The jewelry Gómez & Molina gave away a jewel among all the attendees who had bought their ticket, valued at € 18,000.

The money collected this year is planned to help finance the Centro de Día (Day Center) which the association plans to inaugurate soon in Marbella, worth to mention the venue has been donated by Marbella City Hall, where its main task would be like a meeting point for those affected by cancer and help them during that process.

Among the auctions, it's important to emphasize artworks like those of Ada de Mourier, Miguel Gómez, and Molina or Miguel Más and paintings of Curro Leyton, which is preparing the new design of one of the most important aircraft fleets in Europe, or experiences and collectors' items. Surprising things like one of Arturo Fernández's ties, or a helicopter flight to check out a panoramic view from all Costa del Sol, valued at 5,000 euros, and "VIP" tickets to experience Placido Domingo at the Metropolitan Opera in New York with a flight of round trip, plus accommodation in the Kike Sarasola's Room-Mate Service

1st Edition of the Film Festival in Puerto Banus, Marbella 2017 (1)