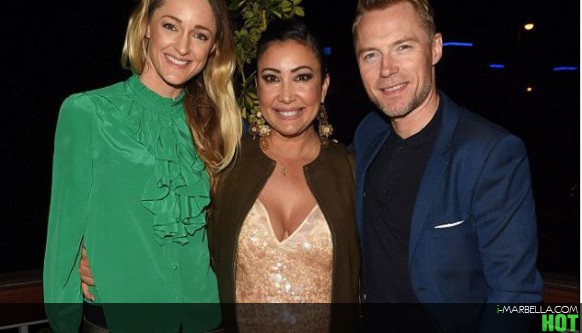 The former Boyzone member Ronan Keating joined forces with two Spain-based charities to raise money for the charity named after his mother Marie, who died of breast cancer in 1998. The cocktail was the opening party for the Global Gift Celebrity Golf Challenge Weekend in aid of the Marie Keating Foundation, Global Gift Foundation as well as for the Cudeca Hospice.

The Irish singer and his gorgeous wife Storm Keating made a glamorous appearance at La Sala Banus to kick off the charity weekend. They were joined by other famous faces including Made in Chelsea's Ashley James, former footballer Stephen Hunt, A Place In The Sun star Laura Hamilton, and the TV presenter Olivia Cox.

The celebrities were treated to La Sala’s signature canapés, entertained by our talented magician as they were enjoying the live music from Mr. Maph & Simone. After the welcome cocktail at La Sala Banus, the celebrities took part in a golf tournament on Saturday at the Estepona Golf Club, followed by a gala dinner and an unplugged concert with Ronan Keating at the Hotel Gran Meliá Don Pepe in Marbella.