Make money 2% in month with Artificial Intelligence. Is it safe?
Charity 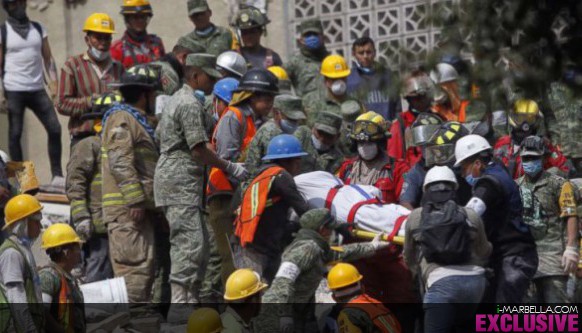 The Army trying to find and rescue people buried Source: Facebook and AluxPhotoConcepts


Aat least 230 people have been killed after a huge 7.1 magnitude earthquake rocked central Mexico, causing hundreds of buildings to collapse in the capital, Mexico City.

On September 19, 2017, Mexico was paying homage to the anniversary of the earthquake of 1985, one of the most terrifying earthquakes that happened to the city. And just one hour after the emergency drill, a 7.1 magnitude earthquake hit the city, leaving destruction and chaos behind.

A lot of buildings have been falling down since the earthquake happened, around 2 pm this Tuesday. Schools, hospitals, apartments, and houses have fallen down with people inside. The army, the police, the rescue teams and the Mexican civilians are trying to find all the missing people, we are still trying to find a buried girl who is supposed to be alive with no luck so far.

We are doing our best to help as many people as possible, but the distances are huge, the supplies aren't enough and the roads don't allow it. Some of us have cycled over 70k to distribute food, water, medicines and to help to remove building waste. But it is not enough. Cycling is the easiest and fastest way to move around the city at this point.

Yesterday, the number of buildings down was around 40, today the number has increased to hundreds and more people need help. And we are just talking about Mexico City, other states like Puebla and Morelos have bigger problems as soon of the cities are totally destroyed, like Jojutla.

Mexican officials have said that the death toll so far is at least 216 people and more to come as more buildings are falling apart.

Many people fled into the streets, and electricity and phone lines were down in parts of the capital.

People moving building waste after the Earthquake in Mexico City

The earthquake comes just days after Mexico was hit by an 8.1 magnitude tremor, the biggest to hit Mexico in a century, killing at least 98 people.

If you are reading this, and you feel like helping someone in need, Amazon has a page where you can donate things we need here in Mexico, this is the link:

Of if you don't want to use Amazon and prefer a more direct communication, you can contact me on this email: alejandro@imarbella.com, any donation you make will help Mexican people to go through this terrible situation.

By: Exclusively for I-Marbella from Alejandro Jaime