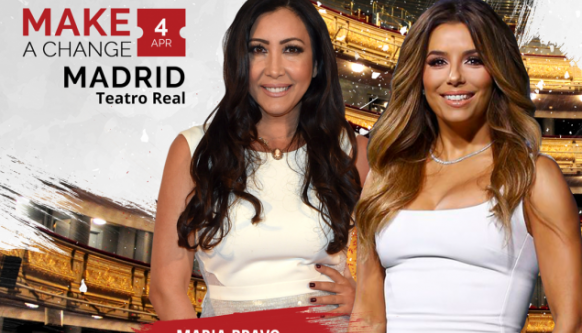 Global Gift Foundation today presented the details of its 2nd Global Gift Gala in the Spanish capital, which this year will take place in the emblematic Royal Theater. The press conference was attended by Father Angel, founder of Messengers of Peace and beneficiary of the event, Angela Navarro, founder of the NGO that bears her name and Global Gift Humanitarian Award recipient, 2 Michelin Star Chef Ramón Freixa, who will be creating some of his culinary wonders on the evening.  Rafael Amargo, flamenco dancer and actress / presenter, Belinda Washington & Global Gift International MARCOM Director, Hazel Gormley-Leahy, who led the presentation.

The host of the gala, Maria Bravo, apologized for her absence through a recorded video in which she said she felt "grateful and happy to have another year with the unconditional support of celebrities, artists and sponsors, to achieve change in Spain and in the World".

Maria Bravo presented the actress, director and activist, Eva Longoria Bastón, as Honorary Chair of the 2nd edition of the Global Gift Gala, which this year will be presented by the Comedian duo Los Morancos de Triana, known as Los Morancos. Artists such Taboo from The Black-Eyed Peas, Adrián Martín Vega, Belinda Washington, José Mercé, Salvador Beltrán and Rafael Amargo will perform, in addition to other stars to be confirmed.

Bravo announced the Global Gift Awards, awarded to those who have achieved a change in the lives of others through their personal and professional involvement:

This year, the Global Gift platform rewards a charismatic and unique sportsman, soccer player Cristiano Ronaldo, for his exemplary philanthropic work. Ambassador to Save the Children and philanthropist of innumerable causes in which he has saved the lives of children completely anonymously, he will be honored by his lesser known facet with one of the foundation's most significant awards, the Global Gift Philanthropist Award

Global Gift Foundation recognizes Ángela Navarro with the Global Gift Humanitarian Award, for her philanthropic work since 2002, through the foundation that bears her name. The foundation focuses on providing image consulations & integral aesthetic treatments for women undergoing chemotherapy. Angela Navarro gives cancer sufferers the chance to have a normal appearance: "Suddenly the best job of our life was not to beautify perfect models, but allow normal and ordinary people achieve something as simple - and as complicated - as looking at themselves in a mirror and seeing what they were like before the cancer affected them".

Global Gift honours the philanthropic work of the Teatro Real Foundation with the Our Heroes Award, which highlights the solidarity of people and institutions that work to bring about a change in their community.
Since 2014, the Royal Theater Foundation has carried out a Social Program especially linked to children, introducing music and musical performances, to children and youths who are in unfavorable situations, whether physical, mental or social.

"We have chosen this year as a wonderful stage as the Royal Theater, which is also immersed in the celebrations of its Bicentennial, and we want to reward its" Social Class "initiative included in its social program, whose purpose is to motivate and develop the capacities of The children through the collective practice of music, as well as arousing the curiosity and perception of the artistic world, with more than one hundred children participating in an orchestral group and a choir, "explained Hazel Gormley-Leahy, Head of Marketing of Global Gift Foundation.

Beneficiaries of The Global Gift Gala

Messengers of Peace was founded by Father Angel in 1962. They create functional homes for children and young people that don´t have a family environment or are in a situation of abandonment. The association also carries out activities in other unprotected social sectors: female victims of domestic violence, the physically and mentally handicapped, the elderly living in solitude, neglect or poverty. Faced with the social and demographic reality of Spain and other countries, where the population is growing older, the social needs of pensioners are clear – they suffer from loneliness, abandonment, social exclusion and scarce resources. Messengers of Peace aspires that, through solidarity and the efforts of all, the necessary changes are made for authentic social progress. They give special attention to children and women, promoting individual development and collective empowerment, generating dignified and self-sustaining living conditions for all.

Global Gift Foundation was created in 2013 by philanthropist, Maria Bravo. The foundation provides shelter, food, clothing, education and medical care to children and women in need, anywhere in the world. The foundation also addresses people at risk of social exclusion, regardless of race, religion, sex and age, as well as funding study programs to find solutions of rare or chronic diseases. Casa Global Gift is the first multifunctional center for children with so-called "rare" or chronic diseases that the foundation is implanting in Marbella.