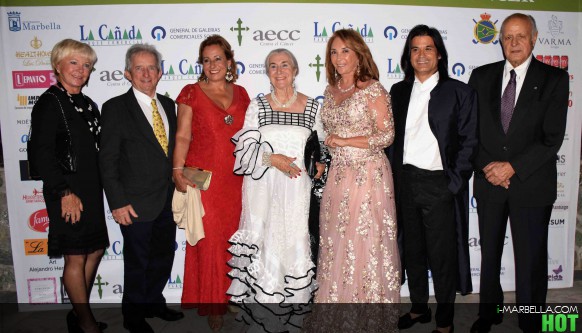 This was the XXXIV Gala Dinner Against Cancer @ Marbella, August 2017 Source: boomMarbellatv.es


The Spanish Association Against Cancer celebrated a Gala evening to raise funds at the Real Club de Golf Guadalmina.

The XXXIV Gala Charity Gala of the Local Board of Marbella at the Royal Golf Club Guadalmina held on August 5, 2017, was a resounding success with overwhelming results and no one expected, this year has managed to get an amount above € 200,000 in a single night.

The guests enjoyed an excellent moment in the XXXIV Gala Dinner Against Cancer @ Marbella, August 6, 2017

The sale of tickets this year will have to be added to what was obtained in the auction and subtract the organizational expenses to be able to obtain the final balance of 2017 that clearly will be well above that obtained last year (€ 117,703.48). The president of the Local Board of AECC Marbella, Maika Perez de Cobas, the association was also represented by the president of the Provincial Board of AECC in Malaga, Francisco Aguilar; And to the two new vice-presidents of Marbella, Raquel Bernal and Princess Beatriz of Orleans.

With these figures, the Charity Gala Dinner of the Local Board of Marbella becomes one of the most important events in Spain.

Some of the guests at the XXXIV Gala Dinner Against Cancer @ Marbella, August 6, 2017

The XXXIV Charity Gala Dinner in Marbella had many well-known characters who wanted to collaborate by contributing their solidarity side to the event. The list would be very long but we will highlight some: the former president of the Government, José María Aznar, accompanied by his wife Ana Botella, who spent about 20 minutes with the guests at the cocktail party and excused themselves by another previous commitment; The delegate of Government of the Junta de Andalucía in Malaga, José Luis Ruiz Espejo; The vice president of the Provincial Council of Malaga, Kika Caracuel; The mayor of Marbella, José Bernal; In representation of the Commonwealth of Municipalities of the Costa del Sol, Manuel Cardeña; Those responsible for Starlite Festival, Sandra García Sanjuán and Ignacio Maluquer; Manolo Santana; Carmen Lomana; Maribel Yébenes and Miriam Yébenes; Jaime Ostos and María Angeles Grajal; Olivia Valere; Nuria Fergó; Cary Lapìque; Tomás Olivo; Count Rudy Von Schonburg; Pepe Oneto; Hubertus Hohenlohe and Tellu Hohenlohe, Ada de Maurier, Cristina Szekelli, Federico Beltrán, Pedro Rodríguez, etc.

About The Spanish Association Against Cancer

The Spanish Association Against Cancer ( a non-profit organization) has its headquarters in Madrid and develops its activity throughout Spain thanks to its 52 Provincial Boards, with representation in more than 2,000 locations throughout the country. It was constituted on March 5, 1953, with the purpose of fighting cancer in all known ways or in the future known. It is made up of volunteers, partners and contract staff who join forces to achieve the Association's objectives. The integrity, professionalism, dedication, and responsiveness of all members of the AECC has generated a common culture characterized by continuous dynamism. On September 29, 1966, was registered, with the national number 3,827 of Section 1ª, in the National Registry of Associations. It was declared "Public Utility" by agreement of the Council of Ministers adopted at its meeting on April 24, 1970.

The Fourth Edition of A Cuatro Manos cocktail in Marbella 2017 GALLERY, VIDEO (32)