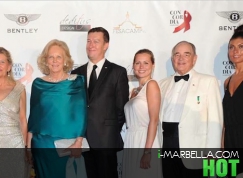 The XX Anniversary Gala of the Anti-AIDS Association called Concordia was attended by 350 people in the beautiful Finca La Concepción on the 1st of August 2014.

The Concordia charity association has been declared of Municipal Public Utility because of its  contributions during its twenty years of existence. This was announced by the mayor of Marbella, Ángeles Muñoz in the 'XX Anniversary of Concordia Anti-AIDS Association' gala whose Honorary President is SM Queen Sofia.

Among the 350 people were a;sp High Commissioner of the Government for the 'Brand Spain', Carlos Espinosa de Los Monteros, Francisco de la Torre, Mayor of Málaga and Francisca Caracuel, vice president of the Provincial Council of Malaga. The sponsors were Bentley Motors, Fesacamp SL Deditus and Design, and they handed over two checks of €30,000 for the association.