"Together for a Dream" on National Day of Children with Cancer 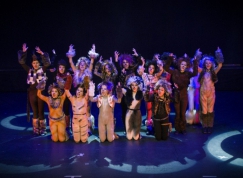 On National Day of Children with Cancer, 70 school kids from Málaga supported the cause with a musical. They performed the play Together for a Dream, featuring famous pieces from Cats, Rock of Ages, and The West Side Story.

On Sunday, December 21, the theatrical performance Together for a Dream took place at Marbella City Theatre. The musical was performed by 70 children from the province of Málaga. The youngsters, supported by their schools, El Limonar of Málaga and Laude San Pedro International College, put on this charity project with the aim of raising funds for other children of the province suffering from oncological diseases.

The initiative was a great success, attracting a large number of spectators from afar. Children involved in the project sought not only to support the sick (some having been and some continuing to be pupils at their own schools), but also their families, a task that the CESARE SCARIOLO FOUNDATION has been undertaking since 2008, along with Marie-Noëlle Communication Agency.

The play, approximately two hours and a half long, entertained the audience with a carefully staged routine made up of a variety of costumes, scenery, choreography, and make-up. Behind the musical, there were many hours of rehearsals and the vision of two stage directors, Karen Fellice Guarnieri and Salvador Moyano, who were loudly applauded by the children at the end of the musical. The play also included a special performance by singer Frank Camelot.

In support of their effort and enthusiasm was also the Town hall of Marbella, which facilitated in not only the use of the city theatre for the musical, but also offered assistance of various members of the staff from the Department of Culture along with providing structures for media coverage in order to reach the largest number of possible citizens. On behalf of the municipal government was the delegate of Social Affairs, Manuel Cardeña.

The president of the foundation, Sergio Scariolo, wished to attend the event with his wife and children, as the former national coach of the Spanish National Basketball Team and former coach of UNICAJA Málaga believed it to be important that his children should understand and get involved in charitable causes.

The transmission of values has also been essential for the directors, Emilio Alcázar and Remedios López, of the two respective schools. The main focus of Together for a Dream was clearly solidarity, but also the notion of being a team and the importance of showing empathy towards others whilst working together in order achieve the end goal.

At the end of the play, Marie Noëlle Erize thanked all participants. The president of the charity organisation, Sergio Scariolo, talked briefly about the actions and aims of the CESARE SCARIOLO FOUNDATION. Awards were given to the representatives of the schools and the City Council of Marbella as a small token of gratitude for the collaboration. The sponsors were also mentioned for their generosity. The local companies involved were Carrefour Express, Viveros Guzman, Stael, and Isoluz.

"Together for a Dream" Press Conference in Marbella