The 7th Edition of the Global Gift Gala London Raises Funds for the Eva Longoria, UNAIDS and Global Gift Foundation 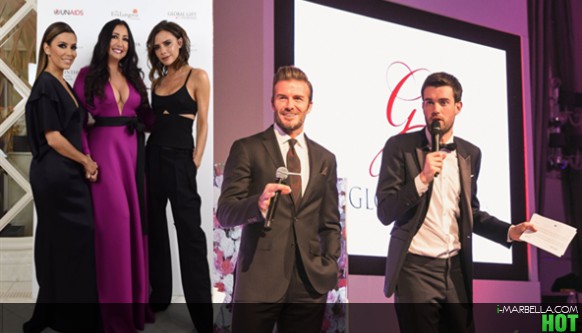 The Corinthia Hotel hosted this exclusive evening with Maria Bravo as Chair. Eva Longoria Bastón and Victoria Beckham were the honorary chairs in an emotional Gala full of surprises. The Gala started with a welcome cocktail where the guests enjoyed the voice of the British Singer Collette Cooper, a Global Gifter who has become a classic in the Global Gift Galas in London and the magic of the renowned magician Archie Manners.

During the Gala, the actress and singer who was awarded with the MOBO prize and MTV EMA Award nominated Rebecca Ferguson sang four songs in this exclusive, intimate, and exciting charity event. The duo of Honeyz singers added talent and rhythm to the night as well as DJs Harriet Rose and Josh Parkinson. Moreover, the recognised Spanish magician Jorge Blass added another magical touch to the evening with his performance.

Also, comedian and actor Jack Whitehall was part of this philanthropic evening as well as Craig David had all attendees on their feet with his powerful and energetic performance.

María Bravo, chair of the Gala, dedicated a few words to the guests and said she was ‘very thankful to see how we continue to help with success after every Gala, improving the lives of those in need and bringing together such different personalities, but all they have a common denominator -- solidarity.

Eva Longoria Bastón, honorary chair and founder of one of the beneficiary foundations of the event, said she was ‘absolutely delighted to be returning to London for the 7th Global Gift Gala. This charity event is an ideal time to recognize the great work of important figures who devote their time and energy to helping those who need it most’.

The Global Gift Gala in London is an international initiative of Global Gift Foundation, a charity founded by Maria Bravo dedicated to philanthropic events around the world to help raise funds and improve the lives of children and women worldwide.

This year, the three organisations that will be benefited from the Gala are the Eva Longoria Foundation, which focuses on women's education and entrepreneurship, UNAIDS, whose goal is to end the AIDS epidemic as a threat to health, and The Global Gift Foundation.

Victoria Beckham, UNAIDS ambassador and honorary chair ,stated: ‘I am proud to support my dear friend Eva at the Global Gift Gala in London this year and to have the honour of hosting this event as international ambassador of UNAIDS. This is a wonderful evening in support of fantastic causes’. In the case of UNAIDS, the funds will support the Joint United Nations Programme on HIV/AIDS (UNAIDS), which leads and inspires the world to achieve its global goal of zero new victims by 2030.

The funds raised for the Eva Longoria Foundation will serve to further strengthen entrepreneurship and microcredit programs for Latina women in the United States, also securing a better future for themselves and their families through education programs.

Maria Bravo explained that the funds corresponding to the Global Gift Foundation will be used, like every year, to create a positive impact on the lives of children, women and families who are in a situation of need. "We will continue with the refurbishment of the Casa Global Gift in Marbella, where thanks to these contributions and donors like Lola Karimova we are advancing. In addition we are helping the family of Alba, the 14-month-old girl from Cadiz who fell from a 4th Floor apartment and needs around the clock care and rehabilitation".

Singer Anastacia received the 'Global Gift Our Heroes Award' on the evening, for being a symbol of survival and social conscience, having dedicated part of her career to raise awareness and working with foundations that provide support for cancer victims and their families.

María Bravo wanted to take advantage of this important philanthropic event to express her appreciation to all those people who make this gala possible saying "I think I speak on behalf of all foundations when I say that every effort is valid when it comes to helping those who need it most. Therefore, I want to thank everyone present for their participation tonight. Together we will continue to strive to make this world a better place”.

A Magic Evening Full of Stars

Guests of the 7th edition of the Global Gift Gala included sport stars such as David Beckham, Robert Pires and Santi Cazorla as well as artists Alesha Dixon, Anastacia, actors like Eva Longoria and Luke Evans among others.

It was possible to follow the evening via the hashtags #GGGLondon16, #GlobalGiftGala and #GlobalGifters with personalities like world renowned chef Gordon Ramsey and his wife Tana, singer Nicole Scherzinger, David Beckham and Pamela Anderson, all highlighting their favourite moments of the night on social media.

Shopping with Victoria Beckham and Seven Nights in Dubai were Auctioned

As usual, a live charity auction was held with luxury experiences, including an invitation to spend an afternoon shopping with Victoria Beckham at flagship London store or the star lot which included seven nights for two in Dubai at the five-star Grosnevor House Hotel, including two seats on Eva Longoria Baston's presidential table during the upcoming Global Gift Gala in Dubai on December 12.

David Beckham himself took to the stage to help auctioneer Hugh Edmeades with his last minute contribution of his personal 12 person box with full hospitality at Wembley Stadium for the England vs Lithuania game.

Two tickets were also auctioned for the VIP box at the Arsenal Football Club stadium, which included a guided tour by former player Robert Pires of the players' locker rooms and private areas, as well as a meet & greet with the players themselves. Similarly, for sport lovers, two annual passes were auctioned for Mr Ecclestones Formula 1 Paddock Club.

The next Global Gift Gala takes place in Dubai on the 12th of December.