Sergio Scariolo: Together for a Dream 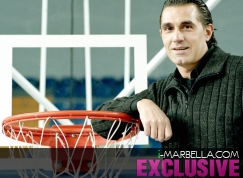 
Mr Sergio Scariolo is an Italian professional basketball head coach. He is the owner of a foundation called Fundación Cesare Scariolo. On December 21, 2014, he is organising a charity event in Marbella called Together for a Dream. i-Marbella had a chance to interview him before the event.

You were born in Italy. When and why did you decide to move to Spain for the first time and train the basketball team?

Actually, my first year in Spain was 1996. I decided to move because basketball there was clearly going upwards and many teams were trying to join the big time (Barcelona/Real Madrid) of European Basketball. After winning two championships in Italy, I felt that I needed to move forward to another professional experience.

When and where did you start your coach career?

I started in my home area when I was finishing playing in a small town not far from Milan. I began with young kids, just like everyone else; I enjoyed it, playing for a couple of years but after an ankle injury, I decided to switch to coaching, actually, it didn't take much time to get to professional level. I was 22 years old and already coaching basketball teams. After finishing my university studies and getting a degree, I decided to become a full-time professional coach.

You are well-known as a basketball trainer. Why didn't you start your basketball career as a player?

Actually, I used to play, but not at a very high level. My basketball career as a player was over because of injury; basically I lost one year, one full season. I didn't feel fully recovered, but again, I didn't feel that basketball missed me as a player. I could have never become a great player, that's why it was right to stop playing and start coaching early in my career.

After a very successful season of 2003-2007 in Spain with the Unicaja Spanish Club from Málaga you decided to move to Russia in 2008? Why?

I had a pretty nice career here in Spain. When I first came here to Vitoria, I was put in the club for the first time in the final championship and ended up winning the King Cup. Then, there was moving to Real Madrid and winning championships over there. I then went to Malaga, where we had five great years of winning national championships and the national King Cup, as well as finishing third in the Euro League. After five years, I felt that it was time to move forward, and I got a really good offer from one of the clubs in Russia that wanted to try reach CSKA Moscow at the top of basketball at European level. After three good years, we finished second in the European competition and second in the national competition. CSKA were basically unreachable, probably having double the budget of any other team, their tradition and political strength made it impossible to win them. After three years, I felt that my time there was over, so I moved to Milan to work with the Milan team owned by Giorgio Armani, and after two years there, I came back to Spain's Vitoria team where I started my career.

What is the biggest achievement in your career?

Well, I've been lucky. I have won several titles and a lot of championships, but I think for every professional athlete, participating in the Olympic Games and winning an Olympic silver medal is the top to reach. So, I think, even though it is a silver medal and not gold, this must have been my highest achievement.

You have had a long career in basketball. How has basketball changed in years?

Everything changes, it's like when you see a kid growing. Each day, when they are with you, it's not noticeable, but if somebody hasn't seen them in three years, they are really surprised at how much the kid has grown. So, I think that on a daily basis, it is just a matter of small adjustments, especially, when it comes to basketball in Europe and, of course, the NBA, the leader. Every day, it is getting better, the organisation is getting better, the people and the passion are increasing every day, also, TV and media coverage is growing. Of course, in terms of the game and the techniques, everything related to sports makes players better athletes. What has really changed in the last year is the athletic level as the skills are improving, but much slowlier. The athletic power of the players and their size have also changed a lot over the last years.

How do you value yourself as a basketball trainer?

I'm not used to assessing myself. All I can say is that I love the game, I love watching it and learning about it. I cannot say that I completely love everything about it, but still, the love and the passion I have for the game itself is stronger than anything else.

You have won the gold medal at both EuroBasket 2009 and EuroBasket 2011. How important was this for your career?

For sure, they were two great moments. When I took over the Spanish national team, it was kind of a mission. Naturally, the team was strong, having many good players, but they were never able to win a gold medal at the European championship, so it was something like a goal that was somewhat difficult to accomplish, and there was a lot of pressure and expectation involved. Finally, we made it for the first time in Poland in 2009, then, in 2011 in Lithuania. The nicest thing was that we were able to make such great players with individual skills, expectations, and egos work as a team; everybody was really cooperating and putting aside their personal expectations, or even wishes, to succeed for the benefit of the group, which was probably the most important accomplishment over those two years.

You have got a foundation called Fundación Cesare Scariolo. What kind of foundation is it?

Well, actually, it's something we decided to start a few years ago as we had two ideas. Basically, one was to honour the name of my dad who died because of leukaemia sixteen years ago and do it in an active and positive way in order to help families going through the same situation my family went through many years ago, the worst of it having a kid involved, struggling, suffering, experiencing a bad time. Our main goal is to help these families go through this period in the easiest possible way, moving forward, either in a social or economical way, but also personally, giving some fun to these kids and, of course, their families as it is a very tough time in their lives. I think that a kid should never ever give up laughing, playing, and having fun. This is what we are trying to do as well as provide financial help that many families actually ask us for.

You are also participating in the Be Inspired charity event. Why did you decide to take part in this event?

Basically, it was a pleasure being invited by Pancho Campo to take part. The goal of the initiative is very similar to the one we have in our foundation. The idea is to share our experiences as sports people faced with obstacles and difficulties. Of course, these may be different to that of somebody going through a disease, but in a certain way, the initiative is very similar. It is the idea of fighting and not giving up, helping each other, and finding a way to overcome the issue. The attitude and the spirit that support people in these moments are extremely important in the success of medical care and therapy.

What do you do now in your everyday life?

Well, I'm doing a lot of things which normally I cannot do when I am coaching. I decided to take a year off here in Marbella, where we have our permanent home, the place we always come back to whenever we have some free time. I'm giving speeches, following the activity of the foundation more closely. I'm also able to be closer to my family, wife, and kids, who are involved and busy with school, and then Alexander with basketball and Carloto with tennis, so it is a really nice way to re-charge my batteries a little bit in order to start over with a new venture and new professional experience next year.

What kind of dreams or goals do you have for your Fundación Cesare Scariolo?

The ultimate dream is to make new projects, have new ideas, help new families, new kids, also to never have to say 'no' to any request of the social assistants of the Maternal Children's Hospital of Malaga, a hospital with an important reference in this area as well as to hospitals of Southern Spain and Northern Africa. I would also like my kids to pay special attention to their personalities, but also to ind the need to help people who are less lucky. But again, the main dream, the main goal is to keep going. We are a small foundation, we need help from many people to survive, but not having to say 'we can't' too many times would make me very happy and satisfied. The next event taking place in support of the Cesare Scariolo Foundation will be a musical called Together for a Dream. The play takes place on Sunday before Christmas, the 21st of December at 6.30 pm, at the City Theatre of Marbella. All the proceeds will go to the foundation. Approximately two hours in length, the performance will be carried out by children from the El Limonar School of Málaga and Laude School of San Pedro de Alcántara (Marbella) who wish to support other kids suffering from oncological diseases. We would like to thank all the children who have given their time and a great deal of effort to be involved in this project.

"Together for a Dream" Press Conference in Marbella

"Together for a Dream" on National Day of Children with Cancer