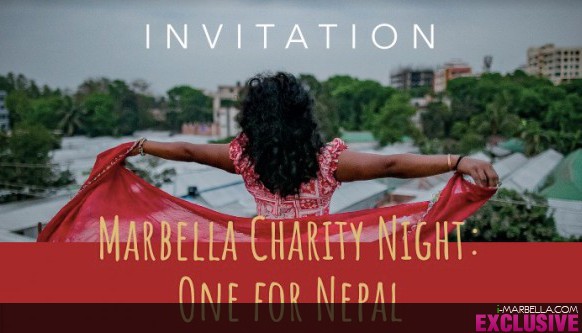 Join us this evening and help to raise money for the Child Protection Centre of Maiti Nepal August 13, 2018 Source: www.freeagirl.nl


Free a Girl, Marbella Dutch Business Club and Cascada are joining forces together against child prostitution in Nepal. These associations are very happy to welcome you to the 2nd Marbella Charity Night “One for Nepal” that will be celebrated at Cascada Cocina & Bar on Monday, August 13, 2018.

The charity event named ‘One for Nepal’ combines artists, business people, and the catering industry to raise as much money as possible for the international organization 'Free a Girl'.

The yield of this evening is especially for The Child Protection Centre (CPC) of Maiti Nepal in Kathmandu. Since 1993, Maiti Nepal has been conducting this Centre, which is a residence for 250 children.  CPC has been offering shelter to children from different backgrounds: most of them have a history of being trafficked or are the children of mothers who were forced to work as sex workers in India.

Apart from taking care of their basic needs, CPC has been providing these children with a holistic care and support service. But also secure sheltered living facility, legal and medical support as well as exposing them to the realities of life outside the shelter. With the money raised, Free a Girl will support a shelter for 250 children in Kathmandu who are a victim of abuse and sexual violence.

A 4-Course Dinner, International Artists, and a Special Auction

The night will include a mix of great performances, a 4-course outstanding dinner will be served by chef Jaap Schaafsma with a menu that is a contemporary mix of Andalusian and Spanish classics.

Thomas Berge and Belle Perez will use their voice to raise funds for 'Free a Girl' at the Marbella Charity Night: ‘One for Nepal’ in restaurant Cascada.

Music will be performed by international artists: Belle Perez is a Belgian-Spanish musician and songwriter, she has a large fan base in The Netherlands. She played at the Ahoy and at the Heineken Music Hall. But her biggest breakthrough came with her third album ‘Baila Perez’.

Other performances will include; Ger Vos, Fred Diaz, and Thomas Berge, this last one, after releasing his first single at the age of 13, he was awarded the prestigious Zilveren Harp, an award given out annually to promising Dutch performers. Thomas continued to release a string of Top 100 charting singles before finally reaching the number one spot in 2009 with “Kon Ik Maar Even Bij Je Zijn.”

Belle and Thomas are both ambassadors of Free a Girl. The special auction, led by auctioneer Junior Zegger, includes amazing items as a meet & greet with Belle Perez, a trip to Monaco with race at the circuit, special art and several beautiful pieces of jewelry.

The official host of the charity dinner will be Mariska Van Kolck who was nominated 4 times for a Johnny Kraaijkamp Award. She won for her role as Tante Jans in ‘Ciske de Rat’ and for the Musical ‘Chicago’ in her rendition of Roxy Hart, both for the Best Female Lead. In 2018/2019 she will be shown in the Musical Comedy ‘Liften’ and as Kniertje in the Dutch classic ‘Op Hoop Van Zegen’.

The Marbella Dutch Business Club is one of the initiators of this evening and has been actively supporting Free a Girl since 2016.  The charity evening takes place in the magnificent restaurant Cascada in Marbella, run by the three owners Arjan van de Vrande, Chef Jaap Schaafsma, and Maryn Gerrits.

Cascada is honored to contribute to the fight against child prostitution again. That’s why they offer their restaurant and efforts for free to jointly collect as much as possible. “The fight against child prostitution demands an international approach,” says Evelien Hölsken, co-founder, and director of Free a Girl. ‘’We are very grateful that The Marbella Dutch Business Club and Cascada will support Free a Girl again this year”.

About Free a Girl

Free a Girl is dedicated to freeing young girls from forced prostitution. The organization invests in rehabilitation, reintegration, empowerment, vocational training and awareness. In the past 10 years, they have contributed to the liberation of more than 4.000 girls from brothels in Asia. Free a Girl works with the police and justice to tackle and condemn traffickers.

How can you join the Marbella Charity Night?

Tickets can be ordered at www.freeagirl.nl/marbella/register or

send an e-mail to info@freeagirl.nl