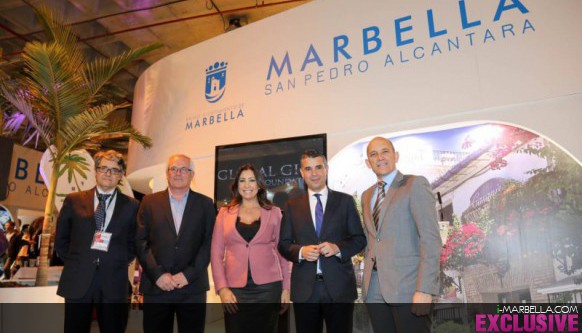 The creator of the Global Gift Foundation, Maria Bravo, and the Mayor of

Tourism Fair and officially presented the sixth edition of The Global Gift Gala,

Marbella, which will take place on July 16 at the Gran Meliá Don Pepe Hotel.

The Mayor thanked the Foundation for its commitment to the city and its altruistic work, while emphasizing the importance for the city to have an ambassador like Maria Bravo and an international event "that projects an image of excellence abroad".

The Founder of the Global Gift Foundation, Maria Bravo, also thanked the Marbella Council for its unconditional support and insisted on the importance of Global Gift Foundation as a charitable foundation constituted in Marbella that promotes and activates tourism and business activity worldwide. Maria emphasized that "the heart & soul of Global Gift that was born in Marbella, is already present in over 8 countries with 12 galas this year with support from personalities like David Beckham, Eva Longoria, Goldie Hawn, Melanie Griffith, Anastacia, Terrence Howard or Vicente del Bosque. Maria said that Global Gift carries Spain, Andalusia and Marbella all over the world, and highlighted that this year Global Gift will reward the work of Cristiano Ronaldo with the Philanthropist award, as well as many other celebrities.

Global Gift Foundation is a philanthropic organisation created in 2013 by Maria Bravo, of Spanish origin but mainly living in Los Angeles. The purpose of the Foundation is to meet the nutritional, educational and hospital needs of children and women in need, anywhere in the world. Global Gift also addresses people at risk of social exclusion, regardless of race, religion, sex and age, as well as funding study programs to find solutions for so-called "rare" or chronic diseases.

The foundation raises funds through its events in various cities around the world such as London, Cannes, Paris, Madrid, Marbella, Estepona, Ibiza and Dubai, adding Edinburgh, Dublin and China to the list in 2017. Founder, Maria Bravo, works to ensure the attendance of international celebrities guaranteeing unprecedented media coverage thus obtaining the support of socially committed companies and individuals.

Global Gift carries out exhaustive monitoring of donated funds, ensuring that the funds are used correctly and only works with fiscally responsible charities, companies and philanthropists.