i-Marbella supported over 70 Charity foundations thanks to you 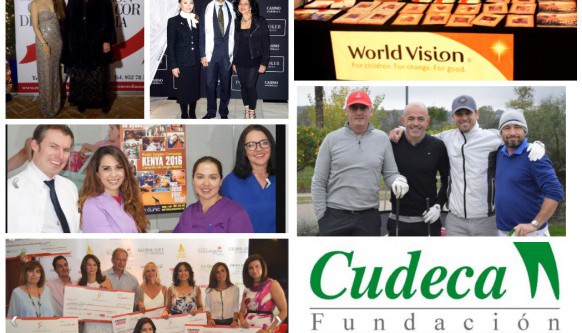 
i-Marbella and all it's readers, followers, supporters have supported over the last decade 60-70 of different charity foundations with over 500 different articles. With our joined forces we have raised millions and done a lot of good for people and animals in need all over the world and also in Marbella, Costa del Sol. And all this work raised people's awareness about the importance of the charities work.

i-Marbella has published more than 500 charity news, galleries, events, articles about raised amounts, contacts of all the mentioned charity foundations as well as their backgrounds.

i-Marbella has reached out over 500.000,00 readers and announced and let readers know and explained about their association.

Here I name just a few of them:

The Concordia AntiAIDS Association is a non-profit, private (non-governmental) organisation which was set up in 1994 to look after the urgent needs of a group of people connected with HIV/AIDS who require special care and services.

*The Spanish Association Against Cancer

*The Costa del Sol’s Food Bank is Bancosol, a non-profit organisation founded in 1998.

*Buy a child in need a gift this Christmas 2017

*Centro Plaza Solidarity Race in Aid of the Red Cross

Global Gift Gala took place at the Gran Meliá Don Pepe on the night of the 17th of July. For the fifth edition, Ms Bravo was accompanied by Amaury Nolasco and Belinda Washington as masters of ceremony.

Maria Bravo stated: “We are proud to celebrate the Global Gift Gala in my city every year, and it is a great pleasure to receive the warmth of people, sponsors, and collaborators as well as the affection of the media who make it possible for this event to be a success”.

Bertín Osborne, Fabiola Martínez, and Isabel Gemio attended the act, as well as one of the Global Gift Founders, María Bravo, who personally handed over the donations.

Global Gift Foundation donated a total of €95,000 raised by two activities run in Spain in 2015:

Bertín Osborne, Fabiola Martínez, and Isabel Gemio attended the act, as well as one of the Global Gift Founders, María Bravo, who personally handed over the donations.

The final tournament of Sala Super League in 2016 took place on 10th December, raising an impressive €6,755 for DEBRA.

The final tournament of Sala Super League in 2016 took place on the 10th December, raising an impressive €6,755 for DEBRA.

The exclusive year-long tournament, organised by Sala Group and kindly sponsored in 2016 by Jackson Grundy, Golfriends and Hiscox has not only been an excellent networking opportunity for local businesses but also a fantastic platform to raise money for worthwhile local charities. So far these charity golf days have raised over a 138,000€ for local children’s charities such as DEBRA and AVOI.

Charity Cocktail for Children in Nepal took place on November 10, 2016.

Saeko Hamada would like to thank Casino Marbella for sponsoring to Monsalvat for Asia Charity Cocktail and Presentation. 4,435 Euro were raised during the night. The special thank-you also goes to Centro Porsche Marbella as well as all the collaborators and participants! Special thanks also goes to i-Marbella.com for the constant support of the organisation's charitable activities and Annika Urm for her donation!

Monsalvat for Asia is an Italian charity foundation created to help children who lost their family during the earthquake in Nepal.

Join us, together we are stronger. The annual contribution is € 50,00 only. Our charitable association is a 100 % transparent. Your donations are in good hands and fiscally deductible. These aid funds will be brought directly to the people in need.

For Donations through PayPal: mfaonlus@gmail.com
For further information, please follow Monsalvat for Asia on Facebook or go to www.monsalvatforasia.org!

Nearly 40 people living with disfigurements in a poor area of Kenya have had their lives transformed thanks to a reconstructive surgery mission, led by Dr. Kai Kaye, Head Surgeon at Ocean Clinic Marbella.

Dr Kaye and his team from Ocean Clinic teamed up with his friend and colleague, Dr Stasch, of Nairobi's Valentis Clinic on the nine-day charitable campaign. Working in collaboration with the Kenyan Society of Plastic, Reconstructive and Aesthetic Surgeons (KSPRAS), they put together an eight-person surgical team, including an anaesthetist and two Plastic Surgery Residents from Nairobi and three nurses from Ocean Clinic Marbella.

The charity camp, which was also organised in collaboration with Spanish NGO Foundation Pablo Horstman, was entirely funded by donations. Marbella companies and individuals, as well as patients of Ocean Clinic, helped to raise €4,000 Euro to support the mission.

The money was used to purchase and transport 300 kilos of materials and equipment, ensuring the team could operate on as many patients as possible.

Meanwhile, the surgical team gave up their time for free and paid for their own flights and accommodation.

The trip to Kenya follows a similar campaign to Peru that Dr Kaye and his colleagues undertook in 2013 when they operated on 60 patients.

World Vision is not just a charity as it was specifically chosen by Daniel Shamoon.

World Vision it was specifically chosen by Daniel Shamoon.

The goal of The World Vision Gala 2016 was to raise funds needed to ensure the vital charity work in Myanmar, rated as one of the poorest countries in the world. The event helped raise the astonishing 50,000 Euro to tackle malaria and provide thousands of families and children in Myanmar (Burma) with a safer, healthier future. It is the world's largest international children's charity, working to bring real hope to millions of children in the world's hardest places.