2nd Centro Plaza Solidarity Race in Aid of the Red Cross on December 11, 2016 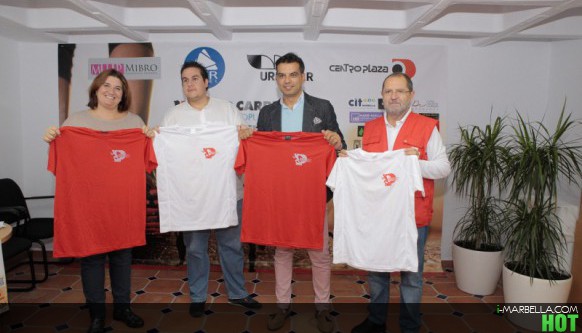 The 2nd Centro Plaza Solidarity Race in aid of the Red Cross will take place next Sunday, December 11.

Next Sunday, December 11, will mark the 2nd Centro Plaza Solidarity Race, starting at 10:00 a.m. from Hotel Pyr and finishing at 1 Avenida Manolete. Following the race last year, the shopping centre will organise this charity run in partnership with Marbella Town Hall and a wide range of public and private entities. All the proceeds will go towards the Red Cross.

A press conference took place at the shopping centre this morning to present the event, which was attended by Manuel García, deputy mayor of Nueva Andalucía, Blanca Fernández, town councillor for sport, Julián García Aguilar, president of Red Cross in Marbella, and Carlos García, manager of Centro Plaza. Fernández and García praised Centro Plaza’s initiative on behalf of Marbella Town Hall, predicting a great success for the run. This success is something that “has been demonstrated on other occasions by the people of Marbella, thanks to their charitable spirit”. García Aguilar described the run as a family competition which combines charity and sport, and made mention of what most of the proceeds of the run will go towards: food and toys for underprivileged families. He went on to encourage the whole city to join in the event. The manager of Centro Plaza gave his own words of thanks to the participants, who include Urbemar, PYR Hotel and MIP Mibro International Properties, whose involvement he commended thanks to the charitable nature of the competition.

A total of 500 participants of nearly all ages will be taking part in the race. The running course, which is of a medium difficulty level, will cover flat ground, uphill and down-hill slopes from Nueva Andalucía to Puerto Banús. There will be 4 different distances to cover, depending on the participant categories. The 400m, 800m and 1600m distances are for the younger age-groups, with the 8km distance for the older participants.

It will be possible to sign up from October 15th until December 8th at midday, and the cost of participation will be either 3 or 8 Euro, according to the age-group. All proceeds will go directly to the Red Cross.

It is possible to sign up either through Centro Plaza's website, at the centre in person, or even on the day of the race between 8:00 and 9:30 a.m. in the tent set up at the starting line (Hotel Pyr Puerto Banús).

With regard to the prizes, there will be trophies for the overall male and female winners, as well as gold, silver and bronze medals for first, second and third place respectively for each gender and category. In the youth categories, those from under 18's to under 23's will receive a running vest and those from prebenjamín (under 7's) to cadete (under16's) will receive a bag or rucksack.