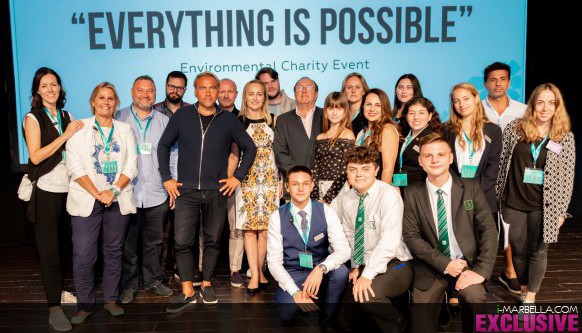 
At a time where the environmental crisis is a reality, Marbella´s Palacio de Congresos united nearly a thousand people to meet Johan Ernst Nilson, one of the World's greatest activists, On the 14th and 15th of October 2019 in what can be described as a mind-changing experience.

Nowadays it is increasingly important to raise awareness and start taking action to protect the environment and conserve biodiversity.

This way, TOWARDS NATURE, managed to unite people in a unique encounter with nature of which the protagonist was Johan Ernst Nilson, all the way from Sweden.

This meeting showed up to be an excellent way to grasp the reality of the ecological risk, through an exceptional witness who has travelled the world and seen it with his own eyes.

50% of his time and efforts are dedicated to charity. Guided by his adventurous spirit and unconditional love of life, Johan has travelled to more than 170 countries and holds the Guinness record for the three poles.

But what is most striking is the force of overcoming that conveys a very clear message: "As long as I keep trying, I can never be said to have failed”.

Moving forward, a total of almost 1000 people witnessed this and have been able to participate actively in giving their views on combating the ecological crisis.

For him, nature is the only thing that is indispensable for man; “we have created the concept of poverty ourselves, but the reality is that only with what the Earth itself gives us, we would have the needs met”.

For two days there have been various musical performances as well as presentations made by the students who took this reflection on the environment very seriously and were able to start raising awareness about it.

As Johan said: “Everything starts with the little things. We have in our hands the way to change the world but the question is whether we want to do it”.

Recounting his own experiences, having explored different corners of the planet for more than 25 years of his life, Johan advised young people to pursue their goals and dreams and to not be discouraged.

He also pointed out how climate change can affect their future, and to this effect, it has inspired them and their parents to take action, to face the problem and to fight as a family for a better world.

Johan explained that today's children are 25% of the world’s population, and 100% of our future´, and that the key is within them, those who have the wish to change the situation we experience today.

He also explained that: “We have the responsibility to choose good rulers who make the right decisions, but we must also adopt small changes in our day-to-day lives that are not difficult to carry out but are important when they are combined in the pursuit of greater respect for nature and the environment”

The two-day event was also attended by the director of Culture Carmen Díaz and the director of the Environment Victoria Martín Lomena, along with the organizer of this initiative Alexandra Kondrashova and Javier Pérez Benedí de Marbellayuda.

Besides, some of Marbella´s educational institutions participated in the event with such wonderful enthusiasm.

The event was organized by:

Finally, all funds raised from the event are being donated to the Foundation MarbellAyuda with its program to renovate the pediatric area in the Costa del Sol Hospital, and to the Leonardo DiCaprio Foundation with its Climate Change program.

Find out how to help! www.towardsnature.life