Novak Djokovic Loyal to Marbella, working with Angeles Munoz to get it as Center for Elite National & International Sports @Puente Romano 2020
Celebs 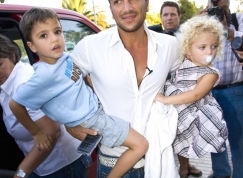 Summer 2009 with go down in the history books as the summer of Katie and Peter, as the UK watched their very public breakup and the surrounding press frenzy. It was hard to pick up a newspaper, turn on the TV or go online without something about the couple cropping up. And at the end of summer, Peter managed to take a few days off with his kids Junior and Princess and headed for Marbella, only a week after Katie and her new boyfriend Alex Page had been on the coast to promote Katie’s KP equestrian range of clothing. That had been the model’s second trip to Marbella in a matter of weeks, as the first featured intimate snaps of the two luridly splashed across the front pages of the tabloids. In contrast to the furore in the UK that greeted Katie’s shoots in the pool with Alex, Peter’s trip underlined his status as the nation’s favourite single parent.

Although his every move in Marbella was shadowed by both the Spanish and British paparazzi, Pete managed to spend some quality time with his kids, including dropping into Novelli’s Restaurant at the Hotel Locrimar (and making an escape out of the back to avoid the crowd of photographers) as well as lunch at the famous Greek restaurant The Red Pepper in Puerto Banus and a day at sea on a motorboat, where he was snapped playing happily with Junior and Princess.

Back in the UK, Peter’s career went from strength to strength. His long awaited single 'Behind Closed Doors' entered the UK charts at Number 4, and he had the honour of singing in front of his lifelong hero Muhammad Ali.  Peter said it was one of his lifetime dreams come true and was happy to now say he had met a legend. His new album, Revelation was also released on September 14.

In the meantime Peter Andre: Going It Alone pulled in a massive 2 million viewers last night.  The 90 minute special which aired on ITV2 followed Peter’s journey over the last two months and it captured the highs and lows of his new life, his promotion for his single ‘Behind Closed Doors’ and his trip to Marbella.

The programme was well received with hundreds of viewers emailing and calling Can Associates Limited, Peter’s management company, the following morning to say how much they enjoyed the show. Claire Powell, Director of Can Associates Limited, said “We are delighted with how the show has been received, to have that many viewers and such a great response is brilliant. It is so great working with Peter, he is such a genuine and real guy and we are glad that the public can see this.”

Peter also became new showbiz reporter on ITV's 'This Morning', where his job is to get the latest gossip from the stars and attend showbiz events and film premieres. He was reported to be very excited to have landed the job and also happy to be working with Holly Willoughby and Philip Schofield, who he absolutely adores.

And at the end of summer a judge has granted Katie Price and Peter Andre the quickie divorce they had hoped for, and after a six-week "cooling off" period where they'll still have the chance to change their minds, the decree absolute will be granted and the marriage will be over. Katie and Peter had already discussed financial arrangements and agreed to shared custody of their children while Pete signed a pre-nuptial agreement before getting married to Katie back in 2005, but always maintained he doesn't want a penny from her. Both parties had filed for divorce from one another, with Pete getting in just before Katie. A legal source explained, "It's nothing more than a petty snipe from Ms Price. It's her way of saying, 'I am not allowing you to divorce me – instead I am going to divorce you'."

But the summer 2009 was certainly a memorable one for “Peter Perfect” as his star continued to rise while Katie’s career went into free fall. A newspaper poll reported that 96% of the public don't believe a word Jordan says...