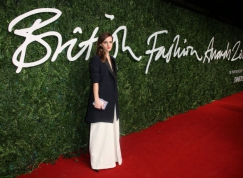 
Last Monday was the night of the British Fashion Awards 2014. Victoria Beckham, Anna Wintour, Cara Delevingne, David Gandy, and Tom Ford could be spotted on the red carpet at London's Coliseum.

It was a magical night for Victoria Beckham, who received the Brand of the Year prize.

"I am so so proud to be British, and I am incredibly glad that I've built my brand here in the UK," said Victoria and thanked her husband David for his support.

Model of the Year: Cara Delevingne

Make sure to watch the video below for the highlights of the show!