The 10th edition of The Global Gift Gala Marbella a Magical Night to Remember, Gallery 2022
Celebs 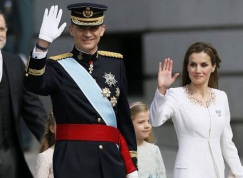 
Felipe VI and his wife Letizia will make their first visit to the UK since becoming king and queen of Spain last year. The royal couple have accepted an invitation from the Queen to pay a state visit in 2016, it was announced on Thursday.

The monarchs will visit from 8 to 10 March and will stay at Windsor Castle. The castle, which is a 90-minute drive away from London, is often used by Her Majesty as her weekend home.

It is also used for state banquets and in the past Windsor has hosted visits from King Abdullah II of Jordan and former leaders President Mbeki of South Africa and President Chirac of France.

Details of the itinerary have not yet been released, but royal watchers can expect to see the red carpet rolled out for Felipe and Letizia. Monarchs are usually greeted with full pomp and grandeur, including a ceremonial welcome at Horse Guards Parade.

Royal fans will also hope to see Felipe, 47, and Letizia, 43, reunited with the nation's sweethearts Prince William and Kate. The Spanish king and queen attended William and Kate's wedding in 2011 when they were still styled as the Prince and Princess of Asturias.