Half Man, Half Guitar!!! 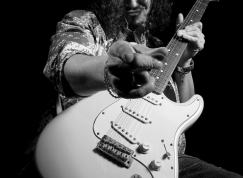 Raimundo Amador will play live at the  Paris 15 venue in Malaga on February 19  to present his new album 'Half Man, Half Guitar', with which he has recorded with  Auserón Santiago, Antonio Vega, Zatu (ZFDK), Matt Bianco's Richard Ray Farrell, Diego Amador and El Pele.

Produced by Raimundo Amador and his son Mundy, 'Half man half guitar' was  been recorded at the Álvaro Slack, Ball, Yenimusic, and Mundy Sonoland Records studios and the album has been well revued as one of yh emost accomplished of his career so far.
The  album consists of a CD with fourteen new songs and a DVD containing the making of the disc as well as  a flamenco performace

Doors open at 21.30 hours and the performance will begin at 22.30. Advance tickets are priced at 20 euros (plus booking fee) and 25 euros at the box office on the day of the concert.

Summer sounds at Shiraz with Monty

Are The Scarletz Messed Up?