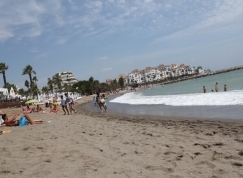 
Spanish tourists have not changed much over the years, and their favourite holidays still include the beach, gastronomic routes and cultural trips.

Free insurance comparison site Seguros.es asked more than 300,000 users what their preferred destination for a holiday by car is. Marbella comes in at first place with 17.5 per cent of the votes, followed by Cadiz (17 per cent) and Barcelona (16), the remaining top ten are Santiago de Compostela, San Sebastian, La Manga del Mar Menor, Madrid, Benidorm, Toledo and Salamanca in that order.

Nineteen per cent of men prefer Marbella, while 24 per cent of women would prefer Barcelona. Twenty-four per cent would prefer holidays on the beach, followed by 21 per cent who like gastronomic tours and 13 per cent who enjoy cultural trips. Less popular are spending the day at a theme park (3.5 per cent), preparing a barbecue in the countryside (3 per cent) or attending an open-air film festival (1 per cent).

Other options were a day in the mountains, a tour of local bars and discos, a trip around the city, or attending the local fiestas. The majority of women (32 per cent) prefer the beach, while most men (23 per cent) would rather go on a gastronomic tour.