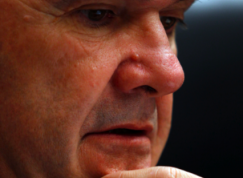 Manuel Chaves said the government will not make a decision which will affect tourism.

The ex President of the Junta de Andalucía says the government will not authorise oil and gas prospecting off the Costa del Sol.

Manuel Chaves, who is now the third Vice-President of the government and Minister for Territorial Policy, was responding on Wednesday to the recent news that permission has already been granted by central government. He denied that, saying that no decision has yet been made and, if anything is authorised, ‘it will only be an investigation to determine the existence or not of gas’.

It’s understood from Diario Sur an environmental impact report is currently pending. Chaves added, ‘No-one is going to extract gas or oil from the coast. No-one in the government will make a decision which will affect tourism’.

Manuel Chaves was speaking in Málaga after attending the meeting to formalise the transfer of responsibility for Andalucía’s coastline to the regional government. He clarified that the Industry Ministry remains responsible for any matters relating to offshore prospecting as the transfer relates to the coast and not to marine territory.

Gerry 18-01-2011 11:32 Crazy. What are they thinking when the coast has enough trouble trying to attract tourists because of the crisis!

Can you imagine if there was an oil spill in Marbella?
0