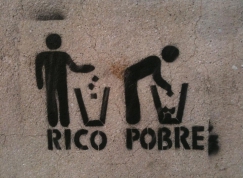 The divide between rich and poor in Spain is the biggest in Europe, according to a report by Catholic charity Caritas.

Those in the top fifth of Spanish society are now on average seven and a half times richer than those in the bottom fifth. While the number of millionaires has increased by 13% in a year, three million people are living in extreme poverty.

“The report paints a picture of a more fractured, more divided society, where the middle-class is disappearing and a minority has access to wealth, goods and services while the majority sits outside,” said Sebastian Mora, general secretary of Caritas in Spain.

Spain has been mired in an economic crisis for four years and its unemployment level is second in Europe, behind only Greece. The Spanish government has predicted economic growth for 2014 and the unemployment rate is beginning to settle, but many argue that having the most unequal society in Europe poses a huge threat to any recovery.

Mora, speaking at a press conference in Madrid, also warned of warned of ‘a situation of neglect, injustice and the dispossession of people’s most basic rights’.

Top 10 Richest People in the World and their Secrets! (1)