Spain's beaches getting ready for summer 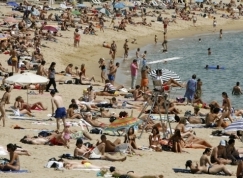 It has taken a battering this winter, but the Spanish coastline is preparing for then arrival of the first holiday-makers this spring.

The Atlantic Ocean's storms battering the Peninsula in recent months are the cause of his bitter look of the beaches. The fury of the waves, the wind and the rain did quite a damage. The holiday season is beginning and coastal regions are immersed in their first test before the summer.  Sifting and centrifugal machines are cleaning the sand, lorries bringing recycled sand, tractors operating from sunrise to sunset. With the economic crisis, many hotel and restaurant owners are hoping that Easter would be their salvation.

The negative news coverage raised the alarm. Beaches wiped off the map or full of rubble and rubbish, drains and pipes uncovered, seafront promenades covered with bits of cane, stones and mud, irreparable steps in the sand, bad news for anyone who was considering a beach holiday and even worse for those who were anxiously awaiting Easter to save their business. In just one day at Easter, a simple beach bar could make between 4,000 and 7,000 euros.

On the Malaga coast, 35,000 cubic metres of rubbish have been collected, the equivalent of the amount generated in a day by Madrid. For the first day of sunshine and swimming the sand has to be in perfect condition For example, the last storms resulted in a drop of 12% of advance bookings at the Parador in Mazagón. With the economic crisis, people wait until just a few days beforehand to make a reservation.

The injection of almost 150 million euros to repair the coastline is bearing fruit, as was seen by the Minister for the Environment, Elena Espinosa, recently when she visited Isla Cristina in Huelva. Nevertheless, some places in Spain will not be as fortunate, as the most popular beaches have been given priority.

The possibility of more storms - the bad weather is not expected to end until May - have left some repair works on stand by, and some beaches, such as in Rota and Chipiona, have been so badly damaged that it would be impossible to repair them so quickly. In some places, such as Gandia, in Valencia, the repair works haven’t even begun.