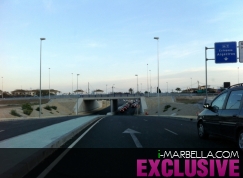 
The underpass in San Pedro was finally finished this Tuesday!

The Ministry of Public Works made an underpass for the A-7 motorway, which will give 90,000m2 in the heart of San Pedro open for new developments. Truth is the work should have already been finished in 2009, so last year the Ministry gave a promise that it will be done by early 2012. The former Ministry of Public Works, under Jose Blanco, was harshly criticized by the conservative Partido Popular for the delays in the work, due to lack of payments. However, the new PP team has made it an “absolute priority” and also revealed that €10 million still remains to be paid.

The underpass work began almost five years ago and the purpose was to stop the motorway from dividing the area in two, and do away with the need for traffic lights and pedestrian crossings to make traffic flow more fluidly. Now that is finally completed it is estimated that over 65,000 cars will use the one-kilometre underpass daily!