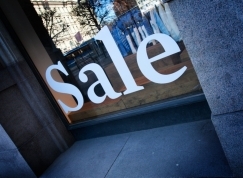 
The sales started on Friday, with discounts of up to 70 per cent and initial reports are that trade is slightly better than last year. The biggest discounts are seen on clothing, which amounts to 75 per cent of sales during this period, followed by accessories amounting to 10 per cent of sales.

Mercedes Rodriguez, Manager of Charanga, a child’s clothing store in Arroyo de la Miel said the first day of the Sales was “better than 2010, but in the days since then it has been more or less the same. I think it will get a bit better in the next few weeks.”

The sales assistant, Inma Hatero, from Arpe shoe shop in Benalmadena agrees: “Sales are a bit better this year than last, we are probably on par with how things were back in 2008.”

Meanwhile, shopkeepers hope that sales will amount to approximately 30 per cent of their annual takings. In Malaga, people will spend an average of between €80 and €90 in the winter sales which will continue until March 7.

Michael Jackson's Home Up For Sale

Leaked memo suggests Yahoo is up for sale